A hydraulic ram pump works under basic laws of physics to lift water against gravitational pull to a height higher than that of the source. This pump works without any external energy supply such as burning of fuel. The only energy is the kinetic energy of the water being pumped. The greater the head the higher the distance pumped.

To understand how the ram pump works, it is important to have knowledge of water hammer principle.

Fluid hammer − The fluid hammer effect occurs when a fluid (in this case water) is forcefully stopped or its direction changes suddenly. A pressure shock is experienced and the wave is conducted back to the source of the fluid. This could be a dangerous phenomenon causing tires and pipes to burst or collapse. 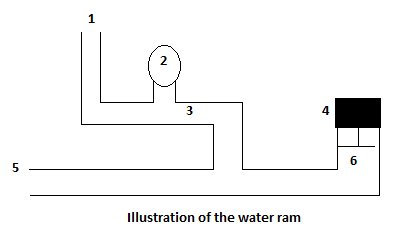 The process is repeated with pressure building up each time.

Label 2 is a pressure controller containing air. It cushions the shock whenever 6 closer and water is pushed through 3. It helps protect the piping from impact that could lead to bursting as well as aid the pumping effect. The ram is 60 to 80 percent efficient. This does not directly reflect the ratio of water pumped as it relies on the vertical height of water pumped. In other words, this is the efficiency of the pumping effect to energy from the water hummer effect.

Calculate the estimated power for a turbine rated with 85 percent efficiency. The flow of the river is 80 cubic meters per second and the streams intake is situated 147 meters from the location of the generator turbines.

Power is given by W = Efficiency * head * flow * density * gravity

Converting specific density of water to SI units, we get 1000kgm-3

Substituting the values in the formula −

Given the actual power received in a particular day was 1,440,000kWh; calculate the efficiency of the generator. Assume gravity to be 9.81 ms-2. Specific density of water 1 gcm-3.