We interface the I/O device in a very segmented manner and is carried systematically. In the interfacing of seven segment display to 8085 microcontroller it is found that An output device which is very common is, especially in the kit of 8085 microprocessor and it is the Light Emitting Diode consisting of seven segments. Moreover, we have eight segments in a LED display consisting of 7 segments which includes ‘.’, consisting of character 8 and having a decimal point just next to it. We denote the segments as ‘a, b, c, d, e, f, g, and dp’ where dp signifies ‘.’ which is the decimal point resulting to a seven display circuit of LEDs which are seven segmented now the display is visual to the serial transfer of 8085 microcontroller. The portion which is displayed of the interface has 4 LEDS comprises of 7-segments LEDs as we can see from the physical layout of the interface. The connection to the interface is done by the ALS-8085 kit which uses a flat table of 26 crores. We connect the connector C1 to the interface to the Input Output connector P3 on the ALS kit. 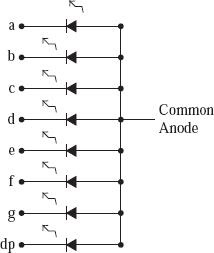