Media files contain different types of display content such as images, videos, and many other files. Grav finds and processes these files automatically to be used by any page. By using the built in functionality of the page, you can access metadata and modify the media dynamically.

Smart-caching is used by Grav that creates in-cache generated media when necessary. This way all can use the cached version instead of generating media again and again.

Following are the media file types that are supported by Grav −

Following are a few types of display modes in Grav −

You can locate the thumbnails using three locations −

Grav gives an output of an anchor tag that contains some of the elements for the lightbox plugin to read. If you want to use a lightbox library which is not included in your plugins, then you can use the following attributes to create your own plugin.

Builder pattern in Grav is used to handle media, to perform multiple actions. There are some kinds of actions which are supported for all medium while there are some that are available only for specific medium.

There are 6 types of general actions that are available for the media types. Each action is explained below.

The following table lists out a few actions that are applied on images.

Animation and Vectorizing images and videos

Grav has image manipulation functionality that makes it easy to work with images.

The above code will generate an output as shown below − 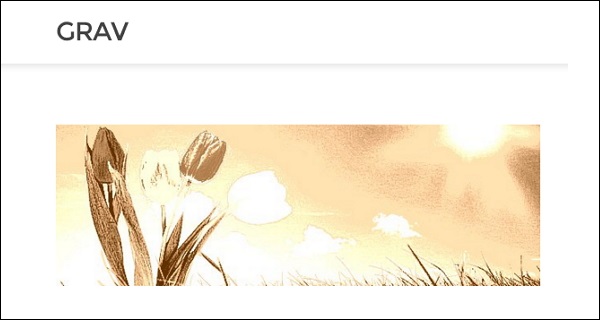 Following table lists out a few types of responsive images.

image1.jpg, archive.zip or any other reference has the ability to set variables or can be overridden by a metafile. These files then take the format of <filename>.meta.yaml. For example, if you have an image as image2.jpg, then your metafile can be created as image2.jpg.meta.yaml. The content must be in yaml syntax. You can add any files or metadata you like using this method.