Flooding and fixed routing are methods to transmit data packets from the source to the destination through a number of intermediate routers connected by transmission lines.

Flooding is a non-adaptive routing technique following this simple method − when a data packet arrives at a router, it is sent to all the outgoing links except the one it has arrived on.

Fixed routing algorithm is a procedure that lays down a fixed route or path to transfer data packets from source to the destination. The route is a mathematically computed best path, i.e. “least–cost path” that the packet can be routed through. The routes are stored in routing tables that can change only if the topology of the network changes.

For example, let us consider the network in the figure, having six routers that are connected through transmission lines. We suppose that there is a data packet that must send from router A to router F. 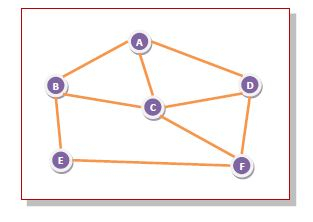 Fixed routing algorithm computes the best path among numerous paths. There may be a number of paths like (A–B–E–F), (A–C–F), (A–D–F), (A–B–C–F) and so on. Fixed routing may choose the best path as (A–D–F) and all data packets will be routed via this path.

Comparison between Flooding and Fixed Routing