Error detection techniques are responsible for checking whether an error has occurred or not in the frame that has been transmitted via the network. It does not take into account the number of error bits and the type of error.

For error detection, the sender needs to send some additional bits along with the data bits. The receiver performs necessary checks based upon the additional redundant bits. If it finds that the data is free from errors, it removes the redundant bits before passing the message to the upper layers.

The two types of parity checking are

Sender’s End − While creating a frame, the sender counts the number of 1s in it and adds the parity bit the value of which is determined as follows -

Suppose that a sender wants to send the data 1001101 using even parity check method. It will add the parity bit as shown below.

The receiver will decide whether an error has occurred by counting whether the total number of 1s is even. When the above frame is received, three cases may occur namely, no error, single bit error detection and failure to detect multiple bits error. This is illustrated as follows - 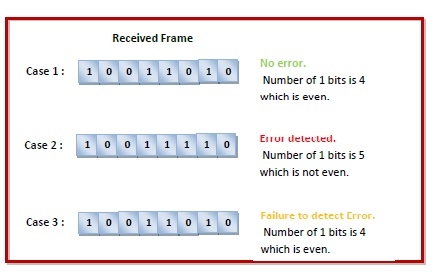