LDPC codes were developed by Robert G. Gallager, in his doctoral dissertation at the Massachusetts Institute of Technology in 1960. So, they are also known as Gallager codes.

A low - density parity check (LFPC) code is specified by a parity-check matrix containing mostly 0s and a low density of 1s. The rows of the matrix represent the equations and the columns represent the bits in the codeword, i.e. code symbols.

The following parity check matrix Hamming code having , with 4 information bits followed by 3 even parity bits. The check digits are diagonally 1. The parity equations are given alongside −

This examples illustrates an (12, 3, 4) LDPC matrix, i.e. n = 12, j = 3 and k = 4. This implies that each equation operates on 4 code symbols and each code symbol appears in 3 equations. Unlike parity check matrix of the Hamming code, this code does not have any diagonal 1s in parity bits. 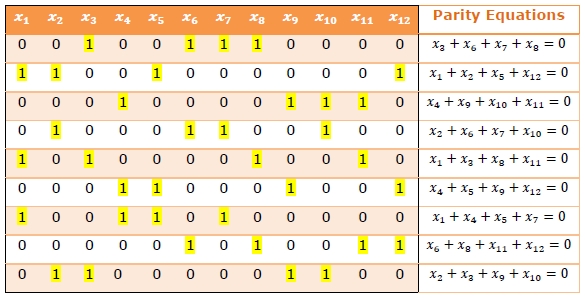 There are two possible decoding techniques of LDPC codes −