What are Error-Detecting Codes?

Error-detecting codes are a sequence of numbers generated by specific procedures for detecting errors in data that has been transmitted over computer networks.

Error – detecting codes ensures messages to be encoded before they are sent over noisy channels. The encoding is done in a manner so that the decoder at the receiving end can detect whether there are errors in the incoming signal with high probability of success.

There are three main techniques for detecting errors 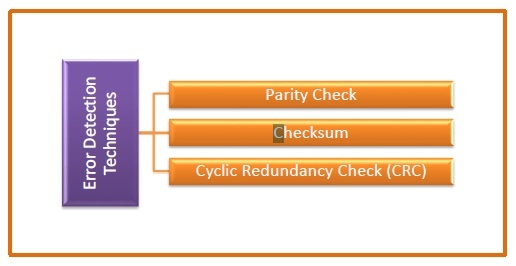 Parity check is done by adding an extra bit, called parity bit to the data to make number of 1s either even in case of even parity, or odd in case of odd parity.

While creating a frame, the sender counts the number of 1s in it and adds the parity bit in following way

On receiving a frame, the receiver counts the number of 1s in it. In case of even parity check, if the count of 1s is even, the frame is accepted, otherwise it is rejected. Similar rule is adopted for odd parity check.

Parity check is suitable for single bit error detection only.

In this error detection scheme, the following procedure is applied

Cyclic Redundancy Check (CRC) involves binary division of the data bits being sent by a predetermined divisor agreed upon by the communicating system. The divisor is generated using polynomials.