Error detection techniques are responsible for checking whether any error has occurred or not in the frame that has been transmitted via network. It does not take into account the number of error bits and the type of error.

For error detection, the sender needs to send some additional bits along with the data bits. The receiver performs necessary checks based upon the additional redundant bits. If it finds that the data is free from errors, it removes the redundant bits before passing the message to the upper layers.

This is a block code method where a checksum is created based on the data values in the data blocks to be transmitted using some algorithm and appended to the data. When the receiver gets this data, a new checksum is calculated and compared with the existing checksum. A non-match indicates an error.

For error detection by checksums, data is divided into fixed sized frames or segments.

If the result is zero, the received frames are accepted; otherwise they are discarded.

After adding all the 4 frames, the sender complements the sum to get the checksum, 11010011, and sends it along with the data frames.

The receiver performs 1s complement arithmetic sum of all the frames including the checksum. The result is complemented and found to be 0. Hence, the receiver assumes that no error has occurred. 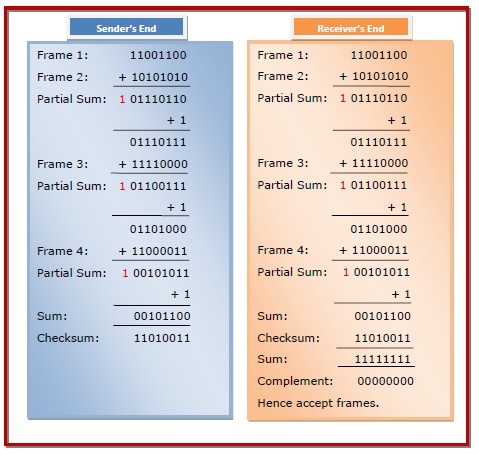