When human eyes see near things they look bigger as compare to those who are far away. This is called perspective in a general way. Whereas transformation is the transfer of an object e.t.c from one state to another.

We will see in detail about why this happens, that those objects which are near to you look bigger, while those who are far away, look smaller even though they look bigger when you reach them.

We will start this discussion by the concept of frame of reference:

Frame of reference is basically a set of values in relation to which we measure something. 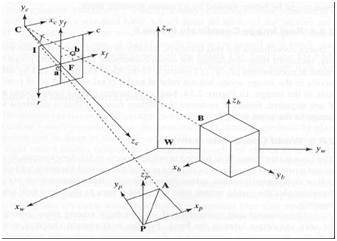 In order to analyze a 3d world/image/scene, 5 different frame of references are required.

Object coordinate frame is used for modeling objects. For example, checking if a particular object is in a proper place with respect to the other object. It is a 3d coordinate system.

World coordinate frame is used for co-relating objects in a 3 dimensional world. It is a 3d coordinate system.

Camera co-ordinate frame is used to relate objects with respect of the camera. It is a 3d coordinate system.

It is not a 3d coordinate system, rather it is a 2d system. It is used to describe how 3d points are mapped in a 2d image plane.

It is also a 2d coordinate system. Each pixel has a value of pixel co ordinates.

Transformation between these 5 frames 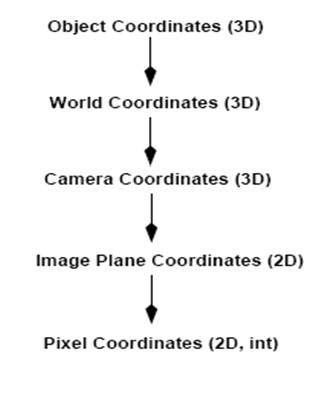 Thats how a 3d scene is transformed into 2d, with image of pixels.

Now we will explain this concept mathematically.

f = focal length of the camera

Z = distance between object and the camera

Now there are two different angles formed in this transform which are represented by Q.

The first angle is

Where minus denotes that image is inverted. The second angle that is formed is:

Comparing these two equations we get

From this equation, we can see that when the rays of light reflect back after striking from the object, passed from the camera, an invert image is formed.

We can better understand this, with this example.

Calculating the size of image formed

Suppose an image has been taken of a person 5m tall, and standing at a distance of 50m from the camera, and we have to tell that what is the size of the image of the person, with a camera of focal length is 50mm.

Since the focal length is in millimeter, so we have to convert every thing in millimeter in order to calculate it.

Putting the values in the formula, we get

Again, the minus sign indicates that the image is inverted.