A schema is defined as a logical description of database where fact and dimension tables are joined in a logical manner. Data Warehouse is maintained in the form of Star, Snow flakes, and Fact Constellation schema.

The following illustration shows the sales data of a company with respect to the four dimensions, namely Time, Item, Branch, and Location.

Note − Each dimension has only one-dimension table and each table holds a set of attributes. For example, the location dimension table contains the attribute set {location_key, street, city, province_or_state, country}. This constraint may cause data redundancy.

For example − "Vancouver" and "Victoria" both the cities are in the Canadian province of British Columbia. The entries for such cities may cause data redundancy along the attributes province_or_state and country.

Some dimension tables in the Snowflake schema are normalized. The normalization splits up the data into additional tables as shown in the following illustration. 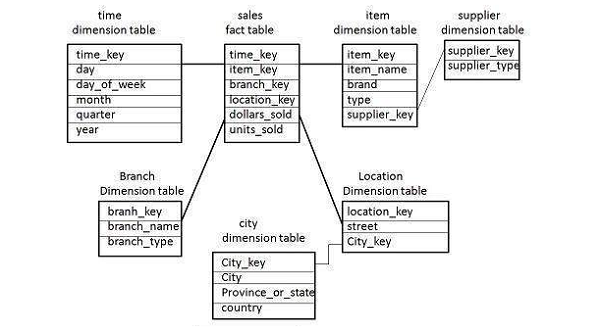 Unlike in the Star schema, the dimension’s table in a snowflake schema are normalized.

Note − Due to the normalization in the Snowflake schema, the redundancy is reduced and therefore, it becomes easy to maintain and the save storage space.

A fact constellation has multiple fact tables. It is also known as a Galaxy Schema.

For example − Time, item, and location dimension tables are shared between the sales and shipping fact table.