It may pass through operational data store or other transformations before it is loaded to the DW system for information processing.

A Data Warehouse is used for reporting and analyzing of information and stores both historical and current data. The data in DW system is used for Analytical reporting, which is later used by Business Analysts, Sales Managers or Knowledge workers for decision-making. 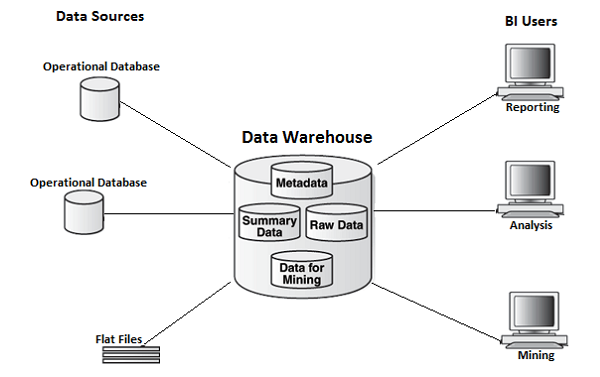 In the above image, you can see that the data is coming from multiple heterogeneous data sources to a Data Warehouse. Common data sources for a data warehouse includes −

Features of a Data Warehouse

The data in a DW system is used for different types of analytical reporting range from Quarterly to Annual comparison.

It defines how the data comes to a Data Warehouse. It involves various data sources and operational transaction systems, flat files, applications, etc.

This is used to perform BI reporting by end users. The data in a DW system is accessed by BI users and used for reporting and analysis.

The following illustration shows the common architecture of a Data Warehouse System.

Characteristics of a Data Warehouse

The following are the key characteristics of a Data Warehouse −

In an OLTP system, there are a large number of short online transactions such as INSERT, UPDATE, and DELETE.

Whereas, in an OLTP system, an effective measure is the processing time of short transactions and is very less. It controls data integrity in multi-access environments. For an OLTP system, the number of transactions per second measures the effectiveness. An OLTP Data Warehouse System contains current and detailed data and is maintained in the schemas in the entity model (3NF).

A Day-to-Day transaction system in a retail store, where the customer records are inserted, updated and deleted on a daily basis. It provides faster query processing. OLTP databases contain detailed and current data. The schema used to store OLTP database is the Entity model.

In an OLAP system, there are lesser number of transactions as compared to a transactional system. The queries executed are complex in nature and involves data aggregations.

What is an Aggregation?

We save tables with aggregated data like yearly (1 row), quarterly (4 rows), monthly (12 rows) or so, if someone has to do a year to year comparison, only one row will be processed. However, in an un-aggregated table it will compare all the rows. This is called Aggregation.

There are various Aggregation functions that can be used in an OLAP system like Sum, Avg, Max, Min, etc.

These are the major differences between an OLAP and an OLTP system. 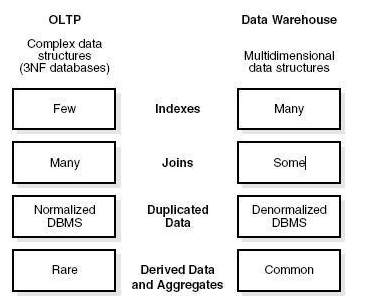 In the above image, you can see the difference between a Data Warehouse and a data mart.

A fact table represents the measures on which analysis is performed. It also contains foreign keys for the dimension keys.

For example − Every sale is a fact.

The Dimension table represents the characteristics of a dimension. A Customer dimension can have Customer_Name, Phone_No, Sex, etc.