Binary Number System is one the type of Number Representation techniques. It is most popular and used in digital systems. Binary system is used for representing binary quantities which can be represented by any device that has only two operating states or possible conditions. For example, a switch has only two states: open or close.

In the Binary System, there are only two symbols or possible digit values, i.e., 0 and 1. Represented by any device that only 2 operating states or possible conditions. Binary numbers are indicated by the addition of either an 0b prefix or an 2 suffix.

Position of every digit has a weight which is a power of 2. Each position in the Binary system is 2 times more significant than the previous position, that means numeric value of a Binary number is determined by multiplying each digit of the number by the value of the position in which the digit appears and then adding the products. So, it is also a positional (or weighted) number system.

Example-1 − The number 125 is interpreted as

Example-3 − A decimal number 21 to represent in Binary representation 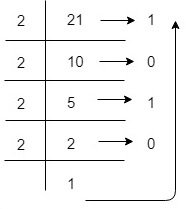 The main advantage of using binary is that it is a base which is easily represented by electronic devices. The Binary Number System are also ease of use in coding, fewer computations and less computational errors.

The major disadvantage of binary number is difficult to read and write for humans because of large number of binary of a equivalent decimal number.