In Asynchronous Transfer Mode (ATM) networks, the ATM Adaptation Layer (AAL) provides facilities for non-ATM based networks to connect to ATM network and use its services. International Telecommunication Union Telecommunication Standardization Sector (ITU-T) have defined several AALs for a range of services. The most widely deployed is ATM Adaptation Layer 5 (AAL 5).

AAL 5 was originally named as Simple and Efficient Adaptation Layer (SEAL).The main functions of AAL 5 are segmentation and reassembly. It accepts higher layer packets and segment them into 48-byte ATM cells before transmission via ATM network. At the receiving end it reassembles the cells to the higher layer packets.

The following diagram illustrates the above function of AAL 5 − 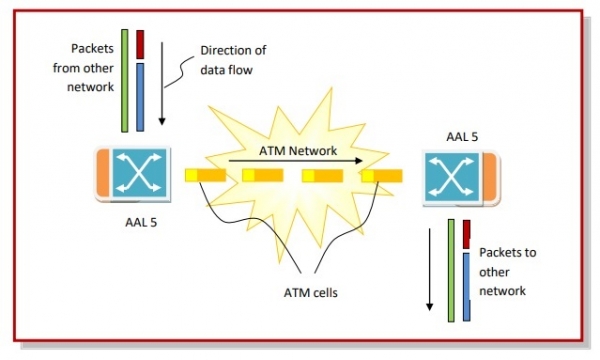 It is used in a number of areas like −

The AAL 5 payload encapsulates the PPP protocol and the PPP data. A padding is added and then the AAL 5 trailer is appended. The AAL 5 trailer may contain a number of fields, the common among which are the length of the payload and the error detection code, typically CRC (Cyclic Redundancy Check).