ATM stands for Asynchronous Transfer Mode. It is a switching technique that uses time division multiplexing (TDM) for data communications.

ATM networks are connection oriented networks for cell relay that supports voice, video and data communications. It encodes data into small fixed - size cells so that they are suitable for TDM and transmits them over a physical medium.

The size of an ATM cell is 53 bytes: 5 byte header and 48 byte payload. There are two different cell formats - user-network interface (UNI) and network-network interface (NNI). The below image represents the Functional Reference Model of the Asynchronous Transfer Mode. 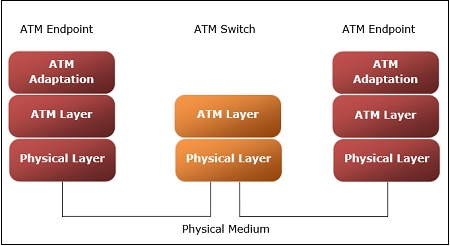 Benefits of ATM Networks are