I/O software is often organized in the following layers −

A key concept in the design of I/O software is that it should be device independent where it should be possible to write programs that can access any I/O device without having to specify the device in advance. For example, a program that reads a file as input should be able to read a file on a floppy disk, on a hard disk, or on a CD-ROM, without having to modify the program for each different device. 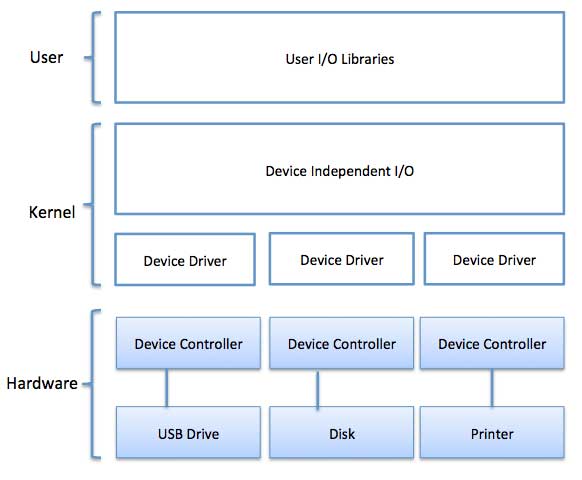 Device drivers are software modules that can be plugged into an OS to handle a particular device. Operating System takes help from device drivers to handle all I/O devices. Device drivers encapsulate device-dependent code and implement a standard interface in such a way that code contains device-specific register reads/writes. Device driver, is generally written by the device's manufacturer and delivered along with the device on a CD-ROM.

How a device driver handles a request is as follows: Suppose a request comes to read a block N. If the driver is idle at the time a request arrives, it starts carrying out the request immediately. Otherwise, if the driver is already busy with some other request, it places the new request in the queue of pending requests.

When the interrupt happens, the interrupt procedure does whatever it has to in order to handle the interrupt, updates data structures and wakes up process that was waiting for an interrupt to happen.

The interrupt mechanism accepts an address ─ a number that selects a specific interrupt handling routine/function from a small set. In most architectures, this address is an offset stored in a table called the interrupt vector table. This vector contains the memory addresses of specialized interrupt handlers.

These are the libraries which provide richer and simplified interface to access the functionality of the kernel or ultimately interactive with the device drivers. Most of the user-level I/O software consists of library procedures with some exception like spooling system which is a way of dealing with dedicated I/O devices in a multiprogramming system.

Kernel I/O Subsystem is responsible to provide many services related to I/O. Following are some of the services provided.