Device drivers are software modules that can be plugged into an OS to handle a particular device. Operating System takes help from device drivers to handle all I/O devices.

There is always a device controller and a device driver for each device to communicate with the Operating Systems. A device controller may be able to handle multiple devices. As an interface its main task is to convert serial bit stream to block of bytes, perform error correction as necessary.

The CPU must have a way to pass information to and from an I/O device. There are three approaches available to communicate with the CPU and Device.

When using memory-mapped I/O, the same address space is shared by memory and I/O devices. The device is connected directly to certain main memory locations so that I/O device can transfer block of data to/from memory without going through CPU. 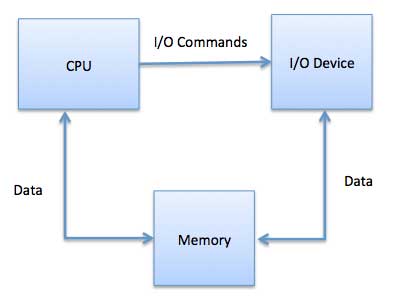 While using memory mapped IO, OS allocates buffer in memory and informs I/O device to use that buffer to send data to the CPU. I/O device operates asynchronously with CPU, interrupts CPU when finished.

The advantage to this method is that every instruction which can access memory can be used to manipulate an I/O device. Memory mapped IO is used for most high-speed I/O devices like disks, communication interfaces.

Slow devices like keyboards will generate an interrupt to the main CPU after each byte is transferred. If a fast device such as a disk generated an interrupt for each byte, the operating system would spend most of its time handling these interrupts. So a typical computer uses direct memory access (DMA) hardware to reduce this overhead.

Direct Memory Access (DMA) means CPU grants I/O module authority to read from or write to memory without involvement. DMA module itself controls exchange of data between main memory and the I/O device. CPU is only involved at the beginning and end of the transfer and interrupted only after entire block has been transferred.

Direct Memory Access needs a special hardware called DMA controller (DMAC) that manages the data transfers and arbitrates access to the system bus. The controllers are programmed with source and destination pointers (where to read/write the data), counters to track the number of transferred bytes, and settings, which includes I/O and memory types, interrupts and states for the CPU cycles. 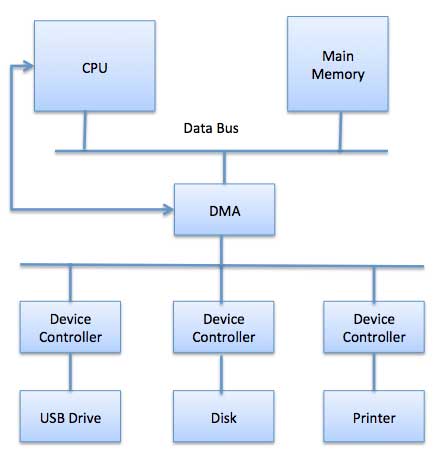 The operating system uses the DMA hardware as follows −

A computer must have a way of detecting the arrival of any type of input. There are two ways that this can happen, known as polling and interrupts. Both of these techniques allow the processor to deal with events that can happen at any time and that are not related to the process it is currently running.

Most of the time, devices will not require attention and when one does it will have to wait until it is next interrogated by the polling program. This is an inefficient method and much of the processors time is wasted on unnecessary polls.

Compare this method to a teacher continually asking every student in a class, one after another, if they need help. Obviously the more efficient method would be for a student to inform the teacher whenever they require assistance.

An alternative scheme for dealing with I/O is the interrupt-driven method. An interrupt is a signal to the microprocessor from a device that requires attention.

A device controller puts an interrupt signal on the bus when it needs CPU’s attention when CPU receives an interrupt, It saves its current state and invokes the appropriate interrupt handler using the interrupt vector (addresses of OS routines to handle various events). When the interrupting device has been dealt with, the CPU continues with its original task as if it had never been interrupted.