Now, let us understand how to construct a Recurrent Neural Network (RNN) in CNTK.

We learned how to classify images with a neural network, and it is one of the iconic jobs in deep learning. But, another area where neural network excels at and lot of research happening is Recurrent Neural Networks (RNN). Here, we are going to know what RNN is and how it can be used in scenarios where we need to deal with time-series data.

What is Recurrent Neural Network?

RNNs can be used in several ways. Some of them are as follows −

Before getting deep dive into the steps, that how RNN can predict a single output based on a sequence, let’s see how a basic RNN looks like− 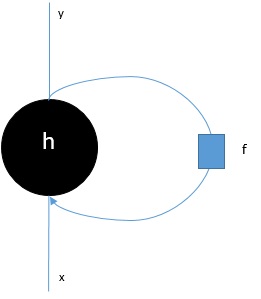 As we can in the above diagram, RNN contains a loopback connection to the input and whenever, we feed a sequence of values it will process each element in the sequence as time steps.

Moreover, because of the loopback connection, RNN can combine the generated output with input for the next element in the sequence. In this way, RNN will build a memory over the whole sequence which can be used to make a prediction.

In order to make prediction with RNN, we can perform the following steps−

In this way, with the help of this loopback connection we can teach a RNN to recognize patterns that happen over time.

The basic model, discussed above, of RNN can be extended to other use cases as well. For example, we can use it to predict a sequence of values based on a single input. In this scenario, order to make prediction with RNN we can perform the following steps −

As we discussed earlier also that a basic layer in RNN is quite different from a regular layer in a neural network. In previous section, we also demonstrated in the diagram the basic architecture of RNN. In order to update the hidden state for the first-time step-in sequence we can use the following formula −

In the above equation, we calculate the new hidden state by calculating the dot product between the initial hidden state and a set of weights.

Next, we can repeat the process of updating the hidden state for the third and final step in the sequence as below −

And when we have processed all the above steps in the sequence, we can calculate the output as follows −

For the above formula, we have used a third set of weights and the hidden state from the final time step. 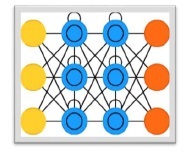 Long-short term memory (LSTMs) networks were introduced by Hochreiter & Schmidhuber. It solved the problem of getting a basic recurrent layer to remember things for a long time. The architecture of LSTM is given above in the diagram. As we can see it has input neurons, memory cells, and output neurons. In order to combat the vanishing gradient problem, Long-short term memory networks use an explicit memory cell (stores the previous values) and the following gates −

Gradient recurrent units (GRUs) is a slight variation of LSTMs network. It has one less gate and are wired slightly different than LSTMs. Its architecture is shown in the above diagram. It has input neurons, gated memory cells, and output neurons. Gated Recurrent Units network has the following two gates −

Before we can start, making prediction about the output from any of our data source, we need to first construct RNN and constructing RNN is quite same as we had build regular neural network in previous section. Following is the code to build one−

We can also stack multiple recurrent layers in CNTK. For example, we can use the following combination of layers−

As we can see in the above code, we have the following two ways in which we can model RNN in CNTK −

Once we build the model, let’s see how we can train RNN in CNTK −

Now to load the data into the training process, we must have to deserialize sequences from a set of CTF files. Following code have the create_datasource function, which is a useful utility function to create both the training and test datasource.

Now, as we have setup the data sources, model and the loss function, we can start the training process. It is quite similar as we did in previous sections with basic neural networks.

We will get the output similar as follows −

Actually redicting with a RNN is quite similar to making predictions with any other CNK model. The only difference is that, we need to provide sequences rather than single samples.

Now, as our RNN is finally done with training, we can validate the model by testing it using a few samples sequence as follows −