A controller is a simple class file. As the name suggests, it controls the whole application by URI.

First, go to application/controllers folder. You will find two files there, index.html and Welcome.php. These files come with the CodeIgniter.

Keep these files as they are. Create a new file under the same path named “Test.php”. Write the following code in that file −

The Test class extends an in-built class called CI_Controller. This class must be extended whenever you want to make your own Controller class.

The above controller can be called by URI as follows −

Let us modify the above class and create another method named “hello”.

We can execute the above controller in the following three ways −

Visiting the second URI in the browser, we get the same output as shown in the above picture. Here, we have passed method’s name after controller’s name in the URI. As the name of the method is “index”, we are getting the same output.

Visiting the third URI in the browser, we get the output as shown in picture given below. As you can see, we are getting the output of the method “hello” because we have passed “hello” as the method name, after the name of the controller “test” in the URI.

This can be a simple or complex webpage, which can be called by the controller. The webpage may contain header, footer, sidebar etc. View cannot be called directly. Let us create a simple view. Create a new file under application/views with name “test.php” and copy the below given code in that file.

Change the code of application/controllers/test.php file as shown in the below.

The view can be loaded by the following syntax −

Where name is the view file, which is being rendered. If you have planned to store the view file in some directory then you can use the following syntax −

It is not necessary to specify the extension as php, unless something other than .php is used.

The index() method is calling the view method and passing the “test” as argument to view() method because we have stored the html coding in “test.php” file under application/views/test.php.

Here is the output of the above code −

The following flowchart illustrates of how everything works − 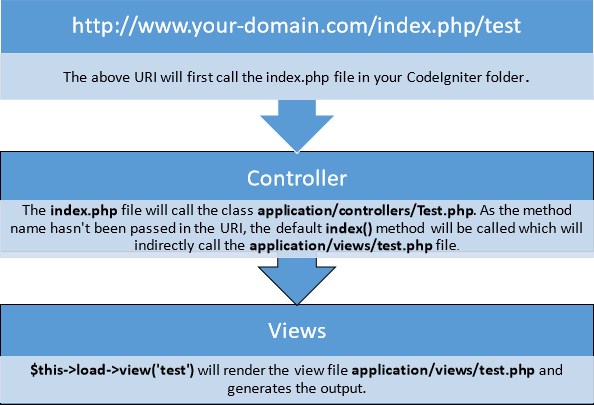 Models classes are designed to work with information in the database. As an example, if you are using CodeIgniter to manage users in your application then you must have model class, which contains functions to insert, delete, update and retrieve your users’ data.

The above model class must be saved as User_model.php. The class name and file name must be same.

Model can be called in controller. Following code can be used to load any model.

Where model_name is the name of the model to be loaded. After loading the model you can simply call its method as shown below.

There may be situations where you want some model class throughout your application. In such situations, it is better if we autoload it.

As shown in the above figure, pass the name of the model in the array that you want to autoload and it will be autoloaded, while system is in initialization state and is accessible throughout the application.

As the name suggests, it will help you build your system. It is divided into small functions to serve different functionality. A number of helpers are available in CodeIgniter, which are listed in the table below. We can build our own helpers too.

A helper can be loaded as shown below −

Where name is the name of the helper. For example, if you want to load the URL Helper, then it can be loaded as −

CodeIgniter has user-friendly URI routing system, so that you can easily re-route URL. Typically, there is a one-to-one relationship between a URL string and its corresponding controller class/method. The segments in a URI normally follow this pattern −

In some situations, you may want to change this default routing mechanism. CodeIgniter provides facility through which you can set your own routing rules.

There is a particular file where you can handle all these. The file is located at application/config/routes.php. You will find an array called $route in which you can customize your routing rules. The key in the $route array will decide what to route and the value will decide where to route. There are three reserved routes in CodeIgniter.

Routes can be customized by wildcards or by using regular expressions but keep in mind that these customized rules for routing must come after the reserved rules.

We can use two wildcard characters as explained below −

In the above example, if the literal word “product” is found in the first segment of the URL, and a number is found in the second segment, the “catalog” class and the “product_lookup” method are used instead.

In the above example, a URI similar to products/shoes/123 would instead call the “shoes” controller class and the “id_123” method.