A process of wireless traffic analysis may be very helpful in forensic investigations or during troubleshooting and of course this is a great way of self-study (just to learn how applications and protocols inter communicate with each other). In order to the traffic analysis to be possible, first, this traffic needs to be somehow collected and this process is known as traffic sniffing. The most commonly used tools for traffic sniffing are Kismet and Wireshark. Both these programs provide a version for Windows as well as Linux environments.

For the purpose of penetration testing and hacking of wireless networks, the type of data, that is valuable to collect are BSSID, WEP IV, TKIP IV, CCMP IV, EAP 4-way handshake exchange, wireless beacon frames, MAC addresses of communicating parties, etc. A lot more is available to you in the dump of the wireless traffic. Most of the information you would get, would be used in all the attacks presented in the last chapter. They could be (for example) used as the input to offline brute-force attacks, in order to break encryption and authentication models used in the WLAN deployment.

Usage of Wireshark in both Windows and Linux are very intuitive - both environments provide a GUI that looks the same for both systems. When the program starts, you only need to indicate the physical interface, that would be used for traffic sniffing (you can select any interface, either wired one or wireless one), and then proceed with traffic sniffing. Example of wireless packets collected by a wireless card is shown in the following screenshot. 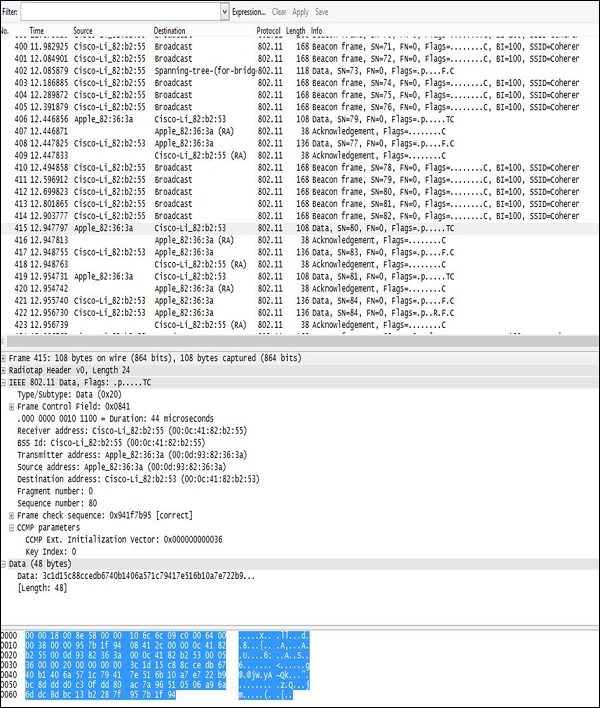 The layout of the output is always the same - going from the top, you have −

You may save all your traffic dumps using the common .pcap format that could be later used as the input to, for example, python scripts which perform some advanced operations on the collected traffic (for example cracking the encryption models). 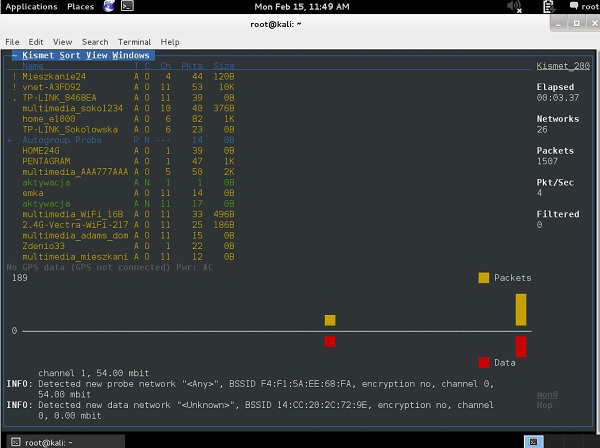 The other tool, that you should aware of, is Kismet. As soon as you start your Kismet tool and specify the mon0 interface, it will list all the SSID detected in your environment. 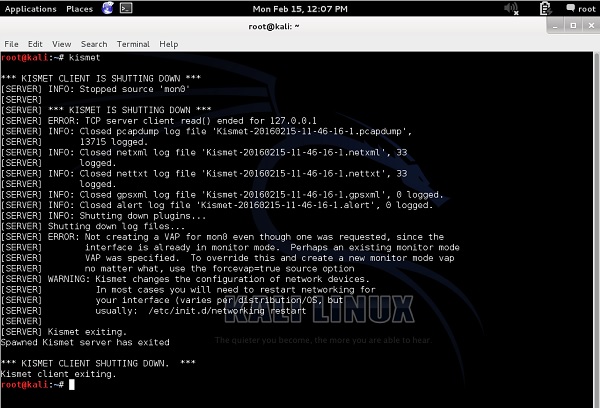 In the example presented above, all the packet dumps have been stored in the binary files (they are not in a readable format, when you open those files with "more" or "vi" or "nano", etc..).

To open them correctly, you have to use Wireshark (again!).