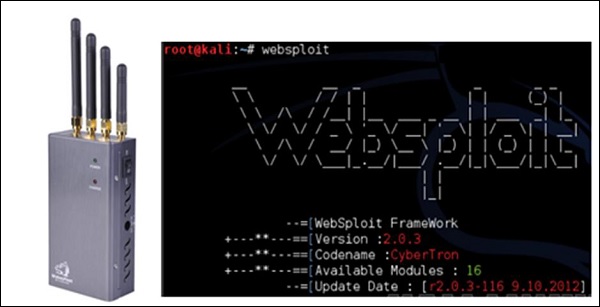 The most common WiFi attack that use Layer 1 DoS is the Queensland Attack.

This is used to disrupt operation of the 802.11 WLAN. A radio card is configured to send out a constant RF signal (much like a narrow-band signal generator). While, other valid wireless clients never get a chance of accessing the medium, because whenever they perform a clear channel assessment (short process of checking the "air" before sending any traffic over the wireless), the wireless medium is occupied by this constant transmitter.

Jamming attacks may also be used to start other types of attack. By using jamming tools, one may force the wireless clients to re-authenticate. After that a protocol analyzer (sniffer) may be used to collect the authentication process (4-way handshake in case of LEAP or WPA/WPA2 Personal). At this point the attacker would have all the necessary information needed to perform an offline dictionary attack. Narrow-band jamming can also be used as a helping tool for man-in-the-middle attack.

Creating a Layer 1 Jammer with software (using Websploit) is extremely easy. I will illustrate the attack using my own home wireless network called "home_e1000". First using airodump-ng, I will collect the information about the WLAN itself (BSSID, channel).

As you can see "home_e1000" wireless network is using the AP with BSSID of 58:6D:8F:18:DE:C8 and operates on channel 6. This is a set of information we need, as the input to websploit framework to perform the jamming attack.

The modules that are relevant to our scenario are under "Wireless Modules" and we will use Wi-Fi/wifi_jammer one.

The "RQ" field column stands for "required", so you will need to fill in all the values here −

Now, when all the required information is set in the websploit framework, you only need to type the "run" command. As soon as the command is executed, the attack starts.

As you can see in the following screenshot, the websploit framework will automatically start aireplay-ng tool and disturb the network. 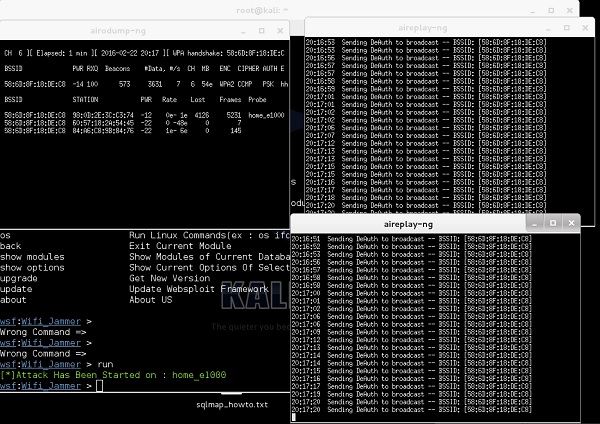 The result of this attack (you can't see that), is that my wireless PC and my smartphone got disconnected, and I cannot really connect back until I stop the attack by putting a "stop" command.