Earlier we had simple analog watches, then came the trend of digital watches, then the one with pulse check, heart rate and finally the smart watches. So, if you forgot your phone but have your smart watch, it’s OK. You can still receive all your important calls and messages. Anyways here we are not talking about the smartwatches but watches with some extra smartness. Confused?

So let’s put it this way, imagine a watch that would use your hand as an interface. Your hand will be your ultimate watch, cool right? You interact with this interfaces outside the smartwatch. This is not just some imagination, but the reality of the smart world. The credit for making this imagination a reality goes completely to Samsung.

Samsung is all geared up to modify the working of smartwatches to a completely new level. They are planning to do this, by changing the Virtual UI. This new smartwatch will be having a projector connected with the watch. A single tap and some gestures will activate the projector onto your skin. This is done using an array of infrared sensors. Not just watches, but Samsung is planning to use this technology to its entire range of Virtual Reality headsets.

If Samsung passes the test to explore how texts and pictures can be displayed with Virtual UI, then a new revolution can be seen flooded in the wearable devices industry.

Industry addicts are always excited and surprised by different and new patents filed by tech companies regarding their new innovations. This patent comes from the smart company Samsung. According to the news, Samsung has filed a patent for the smartwatch and the interesting part is this smart watch would project its display onto the wearer’s hand or any other precise space. 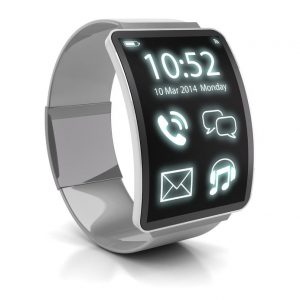 In addition to this, the users will be able to directly interact with the projection, just like interacting with smartwatch screen. This news is giving me goosebumps, it’s like something directly from a spy movie, interesting, chilling, exciting and tempting all at the same time. Now, coming back from the reel world to the real world, there is not much usage of this feature in a smart watch. Of course it’s cool, but that’s it. Nothing more to it.

The projector concept, that is being hoarded is not a new thing, this concept has already been created and used by an Indiegogo startup namely RITOT which named this concept as a Smart band. This company claimed to launch the ‘First Projection Watch’ in the world. The logic behind this was, they fit a pico projector inside the watch band. This projector displayed time, gave access to call and other notifications like Facebook messages, tweets onto a person’s wrist digitally.

RITOT is a relatively new name in the Market

You might wonder why you have never heard of RITOT. This might be because you were never interested in this concept or you were just not interested in what’s going on in the projection displays or maybe you are just interested in the launch of discoveries from known companies. For all gadgets addicts and techies, if you lot of money, then you must include a watch with a projector to your list. 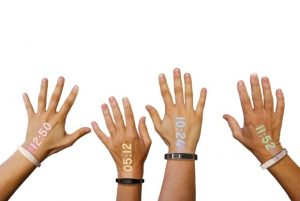 After reading this paragraph, I am sure most of you might have googled about RITOT and would come to know that this smartwatch would simply project an interface onto a person’s hand. I really don’t know why would a person spend so much money just to buy a watch with a projector, when everyone has a smartphone and a watch separately. For a person like me, it would make things more complex and clumsy and if the smartwatch hangs, then it’s too much to sort out.

Coming back to Samsung’s patent, the new thing is here users can commute with these projections. According to this patent with the United States Patent and Trademark Office, this most hyped smartwatch will give the users the ability to commute with the virtual UI screen along with the ability to project the watch’s UI on a hand or any other surface. Another news to hinder your surprise is, this idea is not out of this world or very new. Confused? let me take you just few months back to MWC 2016 to clear your confusion.

To refresh your techie knowledge this was the time when Sony flaunted Xperia projector concept, they used a sensor and a projector to translate ant tabletop or wall into a touchscreen display for the user to commute with. So, coming back to the projection concept in smartwatch Samsung was clever enough to give a new addition to this whole projector smartwatch thing and people are like wow! that’s great etc.

If smartphones with projectors flopped so badly, then what should we expect from a projector smart-phone, how is it different and why should we opt for one? This is not the first time Samsung is experimenting with the projector concept, it has already tried it with Galaxy BEAM and not to mention, it has failed miserably.

Not just Samsung but Lenovo too has tried its hand in this concept, remember Lenovo’s “smart Cast” launched at the Lenovo Tech World conference. It had an inbuilt laser projector, projected a virtual keyboard on a flat surface, facilitates users to commute with the projected display, just like smartphones, but unfortunately not much have been heard about the ‘smart cast’ since then.

Of course, there are plenty of smartphones with this projector concept flooded in the market, but if I ask you to name some of them, i bet you won’t be able to do so, and It doesn’t matter. A phone with a projector, that’s it? The reason is not enough to opt for one. Not to criticize more, you can get the best of it by watching movies on a wall or if you want to project your games, images etc on a wall or desk.

If we go back to searching for reasons to opt for smartphones in the first place, it would be because of the privacy things. For someone who wants privacy, i don’t think will want to have the projector in the smartphone or a smartwatch. Let’s put it this way, how many time will you actually use this projector thing in a day and- God forbid- if you are going through some confidential documents or personal documents and the projector thing is on, you might never ever want to imagine that situation.

If you are a person busy with presentation and seminars, then you would definitely prefer depending on BVGA or HDMI cable instead of depending on such devices you never know what other files might get displayed unintentionally.

After all this, still even if you are interested in a projector smartwatch, the question is can you afford one? If we talk about the one being designed by Samsung, if it ever makes this watch make sure the watch doesn’t blast. Jokes apart, this projector feature actually is of no use, it’s like adding a new expensive toy to your toy collection. It’ high time when we start going opting for devices based on their usable features, rather than using them because of the brand name.