What is Von-Neumann Model?

Von Neumann’s model is composed of three specific components (or sub-systems) including a central processing unit (CPU), memory, and input/output (I/O) interfaces. The figure defines one of the various possible methods of interconnecting these components. 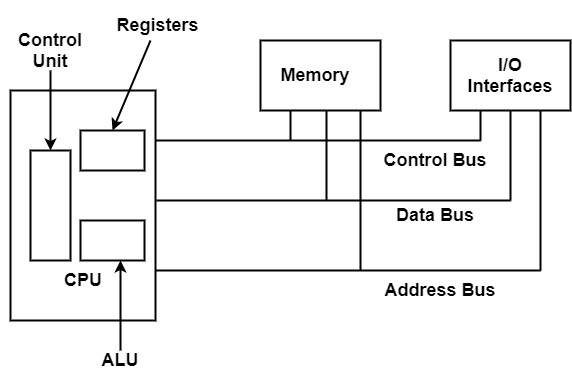 RAM stores the data and general-purpose programs that the machine implements. RAM is temporary and its contents can be modified at any time and it is removed when the power to the device is turned off. ROM is permanent and can store the original boot-up instructions of the machine.

The prior components are linked through a set of signal lines called a bus. As shown in the diagram, the main buses carrying data are the control bus, data bus, and address bus. Each bus consists of multiple wires that enable the parallel transmission of data between several hardware components.

The address bus recognizes both a memory location and an I/O device. The bidirectional data bus sends information to or from a component. The control bus includes signals that allow the CPU to connect with the memory and I/O devices.

The implementation of software in a von Neumann computing device requires the use of the three main components just defined. Generally, a software package, known as an operating system, controls how these three components work together.

After an instruction is fetched, it is placed into a specific register in the CPU, known as the instruction register (IR). While in the IR, the instruction is decoded to decide what kind of operation must be implemented. If the instruction needed operands, these are fetched from memory or probably from various registers and located into the suitable location (certain registers or specially designated storage areas referred to as buffers).