What is the difference between Encoder and Decoder in Computer architecture?

A digital circuit that executes the inverse services of a decoder is known as an encoder. It has 2n input lines and n output lines. In an encoder, the output lines create the binary code equivalent to the input value. The figure displays the general architecture of an encoder circuit.

The decoder is an electronic device that can modify a digital signal to an analog signal. It enables a single input line and creates multiple output lines. The decoders are used in several communication projects that are connected between two devices. The decoder enables N- inputs and creates 2 power N-numbers of outputs. For instance, if it can provide 2 inputs that will make 4 outputs by using 4 by 2 decoder.

Some decoders are established with NAND instead of AND gates. In this term, all decoder outputs will be 1’s except the one equivalent to the input code which will be 0. 2-to-4 line decoder with an enable input generated with NAND gates. The circuit works with complemented outputs and allows input E’, which is also integrated to connect the outputs of the decoder NAND gate. The decoder is allowed when E’ is similar to zero. 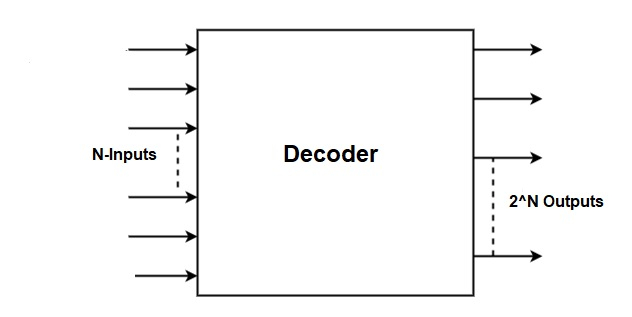 Let us see the comparison between Encoder and Decoder