What is Keiretsu and how do companies follow it?

In Japan, the term "keiretsu" refers to a linked network of businesses that are characterized by powerful partnerships and cross-shareholding. The network developed in Japan and dominated the country's economy throughout the second half of the twentieth century, especially following World War II. They still exist even in the twentyfirst century, but they have undergone significant modifications since their inception. 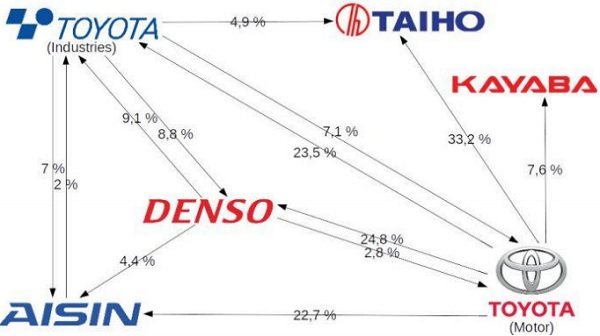 Keiretsu may best be characterized as a complex commercial network having a long-term transactional connection between its participants. Businesses in the network include banks, manufacturers, supply-chain partners, and distributors who all collaborate closely to ensure the success of the whole organization.

The Keiretsu's origins are unknown.

The keiretsu was developed in Japan after World War II and is still in use today. It was established after the fall of the zaibatsu monopoly. They dominated Japanese economy and came to an end after the decline of vertically controlled firms.

The four major zaibatsus were Mitsui, Mitsubishi, Sumitomo, and Yasuda, and they were all Japanese companies. They thrived throughout the reign of the Meiji administration, during which time they received government assistance in the form of lucrative contracts and subsidies.

Japan is the nation that has six of the most famous and prominent keiretsu organizations in the world. They have made a name for themselves locally and now have a global presence. These six organizations are −

The most popular and well-known Japanese name in the world that follows a horizontal keiretsu model is Mitsubishi. It is one of the most powerful companies in the world as well. The structure of this vast organization has The Bank of Tokyo-Mitsubishi at the pinnacle of other 40 individual companies like Mitsubishi Motors, and Mitsubishi trust and Banking.

They work together to assist everyone in the distribution of products across the globe. While doing so, they are constantly establishing new markets for keiretsu in different countries across the world. They are setting up new associations with different organizations as well, and this is reflected as you will see many firms that operate under the keiretsu framework for them will have the Mitsubishi tag.