The MACA protocol works with the condition that the stations are synchronized and frame sizes and data speed are the same. It involves transmission of two frames called RTS and CTS prior to data transmission. RTS stands for Request to Send and CTS stands for Clear to Send.

Let us consider that a transmitting station STA has data frame to send to a receiving station STB. The operation works as follows:

The sequence is illustrated as follows: 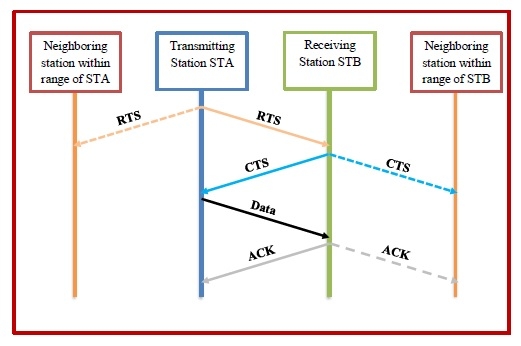 Any station than can hear RTS is close to the transmitting station and remains silent long enough for the CTS, or waits for a certain time period. If the RTS is not followed by a CTS, the maximum waiting time is the RTS propagation time.

Any station that can hear the CTS is close to the receiving station and remains silent during the data transmission. It attempts for transmission after hearing the ACK.

MACA is a non-persistent slotted protocol. This implies that if the medium is detected as busy, a station waits for a random time period after the beginning of a time slot and then it sends an RTS. This assures fair access to the medium.