In computer networks, when more than one station tries to transmit simultaneously via a shared channel, the transmitted data is garbled. This event is called collision. The Medium Access Control (MAC) layer of the OSI model is responsible for handling collision of frames. Collision – free protocols are devised so that collisions do not occur. Protocols like CSMA/CD and CSMA/CA nullifies the possibility of collisions once the transmission channel is acquired by any station. However, collision can still occur during the contention period if more than one stations starts to transmit at the same time. Collision – free protocols resolves collision in the contention period and so the possibilities of collisions are eliminated. 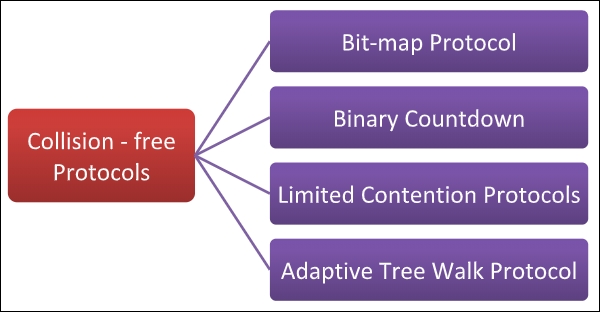 In bit map protocol, the contention period is divided into N slots, where N is the total number of stations sharing the channel. If a station has a frame to send, it sets the corresponding bit in the slot. So, before transmission, each station knows whether the other stations want to transmit. Collisions are avoided by mutual agreement among the contending stations on who gets the channel.

This protocol overcomes the overhead of 1 bit per station of the bit – map protocol. Here, binary addresses of equal lengths are assigned to each station. For example, if there are 6 stations, they may be assigned the binary addresses 001, 010, 011, 100, 101 and 110. All stations wanting to communicate broadcast their addresses. The station with higher address gets the higher priority for transmitting.

In adaptive tree walk protocol, the stations or nodes are arranged in the form of a binary tree as follows -

Initially all nodes (A, B ……. G, H) are permitted to compete for the channel. If a node is successful in acquiring the channel, it transmits its frame. In case of collision, the nodes are divided into two groups (A, B, C, D in one group and E, F, G, H in another group). Nodes belonging to only one of them is permitted for competing. This process continues until successful transmission occurs.