What is a distributed Operating System?

Distributed Operating System is a type of model where applications are running on multiple computers linked by communications. It is an extension of the network operating system which supports higher levels of communication and integration of the machines on the network.

Distributed OS runs on multiple CPUs but for an end-user, it is just an ordinary centralized operating system. It can share all resources like CPU, disk, network interface, nodes, computers, etc. from one site to another site, and it increases the data available on the entire system.

All processors are connected by valid communication media such as high-speed buses and telephone lines, and in which every processor contains its own local memory along with other local processors.

According to this nature, a distributed operating system is known as a loosely coupled system. This operating system involves multiple computers, nodes, and sites, and these components are linked to each other with LAN/WAN lines.

Distributed OS is capable of sharing their computational capacity and I/O files while allowing virtual machine abstraction to users.

The distributed operating system is depicted below − 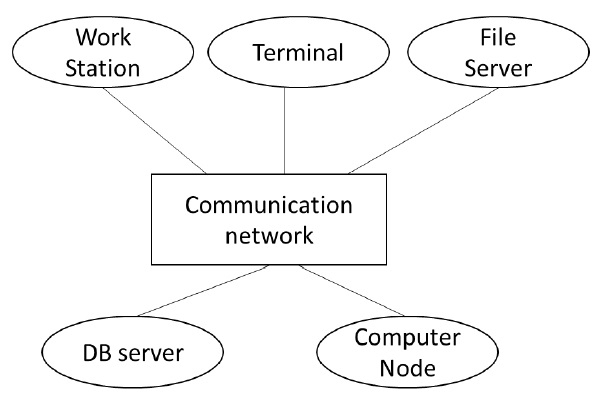 The applications of distributed OS are as follows −

There are three types of Distributed OS.

The Distributed OS is used to a large extent in the organization. Because of more usage the Protection and Security come into the surface where their role is to preserve the system from any cause of damage or loss from external sources and keep it protected.

There are different ways to safeguard the distributed OS by applying measures. Some of the methods are Authentication that includes username/password, user key. One Time Password (OTP) is also one of the main applications that are applied under security in distributed OS.