What are the types of issue blockages in computer architecture? 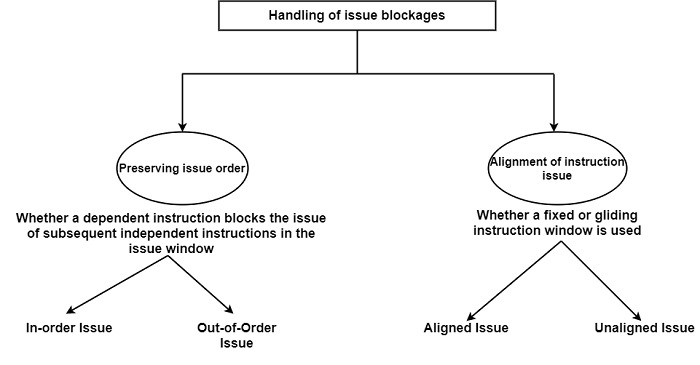 However, restricting subsequent independent instructions from the issue can extremely disrupt implementation. Hence, a few superscalar processors that employ the direct issue mode, including the MC88110 and the PowerPC 601, have introduced out-of-order issues.

The second aspect of handling issue blockages decides the alignment of instruction issues. It refers to whether the instruction is issued from a fixed window or a gliding window.

In the case of an aligned instruction issue, a fixed window is used. This defines that no instructions for the next window are treated as candidates for issue until all instructions in the current window have been issued.

Then a gliding window is employed whose width equals the issue rate. In every cycle, all instructions in the window are tested for dependencies. Independent instructions are issued from the window either in an in-order or in an out-of-order fashion. After the instruction issue, however, the window is refilled.

Therefore, while using shelving, instructions can be issued with almost no restrictions to the shelving buffers. The only condition that remains associate with trivial hardware requirements including the availability of shelving buffers, buses, etc. As an issue, modern superscalar processors that employ shelving have restored to aligned instruction issues. Examples of these are the PowerPC 603, PowerPC 604, PowerPC 620, and R10000.