What are different types of RAM (Random Access Memory) in computer architecture?

RAM is an element of the main memory that is directly usable by the CPU (Central Processing Unit). Memory can save programs and information during computer operations. The major technology used for the main memory depends on semiconductor integrated circuits.

The feature of RAM is that it is volatile. A RAM should be supported with a fixed power supply. If the power is disrupted, therefore the data is hidden. Therefore, RAM can be used only as temporary storage. RAM technology has been divided into technologies which are as follows − 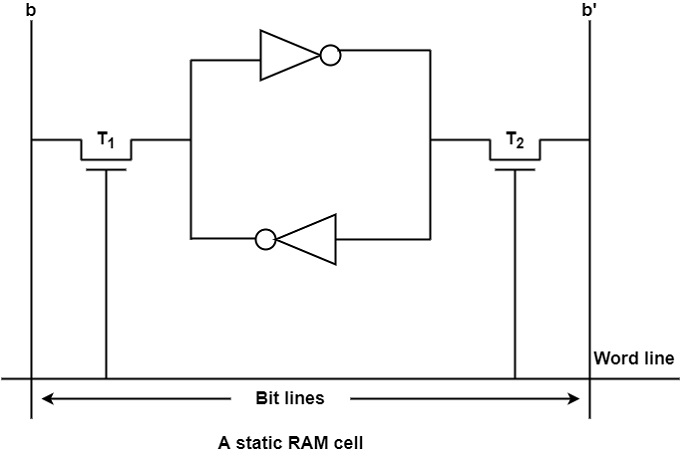 Read Operation − It can read the state of the SRAM cell, the word line is triggered to close switches T1 and T2. If the cell is in state 1, the signal on bit line b is high and the signal on the bit line b’ is low. The conflict is true if the cell is in state 0. Therefore, b and b’ are complements of each other. Sense/write circuits at the end of the bit lines oversee the state of b and b’ and set the output subsequently.

Write Operation − The state of the cell is set by locating the suitable value on bit line b and its complement on b’, and thus stimulating the word line. This causes the cell into the equivalent state. The appropriate signals on the bit lines are created by the sense/write circuit.

In dynamic memory, data is saved in the form of a charge on a capacitor. A DRAM is capable of saving data for only a few milliseconds. Because each cell is generally needed to save data for a much longer time, its contents should be periodically updated by restoring the capacitor charge to its complete value.