The hypothesis for the tornado in a bottle experiment is that the water will transfer quickly from the top of the bottle to the bottom and if the water is made swirled it will create a tornado when compared to its just bubbling through. The movement of winds in different directions and speeds at different altitudes is the main reason for rising air and spinning of the air. This phenomenon causes tornadoes that are determined as natural disasters as they are the violent winds creating a funnel underneath the system of storms. As the rotations of wind continue, its speed gets faster and it creates a funnel cloud eventually.

What is a tornado?

In reality, tornadoes are determined as the most violent storms than all other atmospheric storms. Tornadoes are rotating air column that is formed beneath a huge thunderstorm system. These tornadoes are much more difficult to spot as the wind is invisible. When the funnel cloud starts to form, debris, dust particles, water droplets, and smoke accumulates to form a distinctive tornado (Linfield et al. 2021). Sometimes these tornadoes become huge and enhance their speed and are one the natural disasters. The effect and formation of tornadoes can be prepared and observed through an experiment, and this experiment is named as tornado in a bottle experiment.

There are several interesting facts about real tornadoes that are mentioned below.

This experiment of tornado in a bottle aims to represent the opportunity to make the students understand the centripetal force that pulls a material or a liquid towards the centre when it is moving on its circular path. This experiment also states the guidelines of the safety measures that can be taken during the violent winds of a tornado. 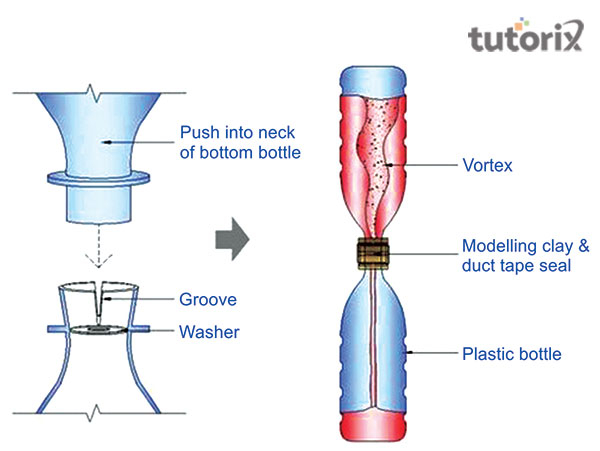 The materials that are required to conduct the tornado in bottle experiment are a funnel tube, water, and an empty bottle made of glass and attached with a lid. On addition of 3-4 tablespoons of sand can help in the determination of the speed and direction of the tornado.

The following procedures or instructions can help to complete the experiment successfully.

By using a large bottle or container a large tornado can be created which will be easier to observe. 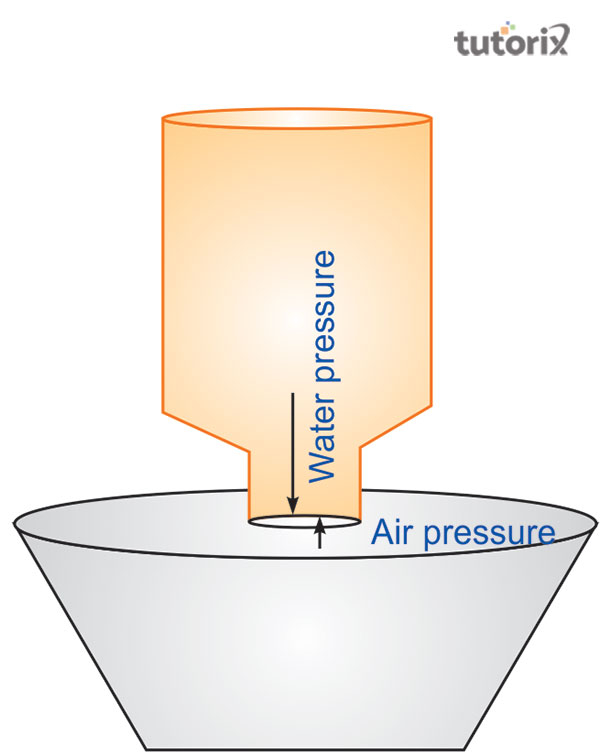 After experimenting with tornado in a bottle, it can be observed that spinning of the glass bottle in a circular motion actually creates the water vortex. The inward or the centipede force that directs the water inside the glass bottle forces the water to move towards the centre and rotate on its circular path (Tang et al. 2018). This phenomenon can also be determined during the observation of the movement of violent storms or tornadoes. During the tornadoes in reality it is the gravity that pulls the water down the hole.

In the context of the Tornado bottle and centripetal force, it can be stated that in a glass bottle tornado forms with the help of the centripetal forces or the inward forces. Through this inward force, the water in the bottle is pulled at the centre and is forced to rotate on its circular path. The high pressure that is created outside the core of the tornado is determined as the centripetal force that pushes the air and gives it a circular shape. In reality, the tornadoes are often determined as violent storm that moves at the speed of about 73-112 mph for a few miles. The tornado winds reach about 300 miles/hour.

Q1. What do you mean by tornado?

The column of air that is violently rotating by touching the land and is generally attached to the base of the thunderstorm is determined as the tornadoes. It basically spawned from powerful thunderstorms and can cause devastation and fatalities in its surroundings within a few seconds.

Q2. What is the major cause of the tornado?

The main cause of tornado is the occurrence of centripetal force. This force is determined as the inward-facing force that can gradually pull liquids or materials towards the centre and makes them move along the circular path.

Q3. What is the speed of the majority of tornadoes that arises in the US every year?

Q4. What are the major effects caused by tornadoes?

The wind speeds and direction of the violent and huge tornadoes can cause the automobiles to become airborne and destroys ordinary houses to shreds. The tornadoes can even turn the debris and broken glass into lethal missiles.