The New Smartphone Battery that Recharges in Just 30 Seconds

Smartphones are like Oxygen of the modern day communication. It is hard to think about 21st century without smartphones. However, one thing that has not kept pace with the increasing usage of smartphones is the smartphone battery. 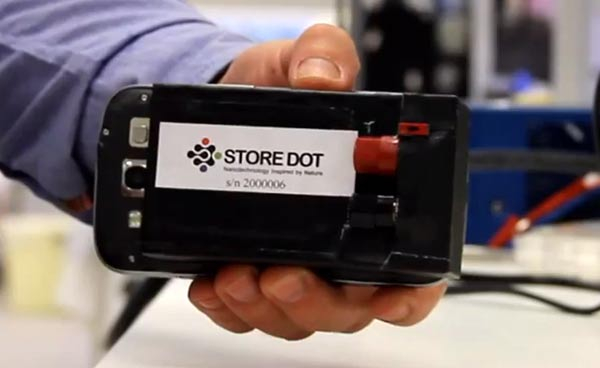 We will understand how the discharging and recharging happens in a normal battery and then discuss how quantum dot is changing the process altogether.

A pair of fundamental types of chemical storage batteries is available nowadays. These are: rechargeable (secondary cell), and the non-rechargeable (primary cell). The processes of storing energy or discharging electricity are similar in both. The fact whether or not the chemical processes involved permits reverse the course of the process is what makes them different.

There are two electrodes in all electrochemical cells that are separated by some distance. A liquid that conducts electricity fills this gap. One of these electrodes (the anode) lets electrons to flow out of it. The other – known as the cathode receives them. The electrical energy is stored in the compounds that are used to build the anode, cathode and the electrolyte such as, zinc, copper, and SO4, respectively.

The aggregate actions of the anode and cathode discharges electricity. The anode undergoes an oxidation reaction where, during the discharge two or more ions from the electrolyte gets attached with the anode to form a compound, and in this process, release one or more electrons. On the other hand, the cathode suffers a reduction reaction where the ions and free electrons combine to form compounds. In simple terms, the chemical reaction at the anode lets the electrons to get released and the cathode receives them.

When we connect the anode and cathode, the electrons freed at the anode pass through the external electrical connection and the chemical reaction occurs at the cathode to make the cell work. The cell goes on to discharge until any one or both of the electrodes fall short of the reagents for their chemical reactions to take place.

Once this happens, the secondary cell starts reversing the whole chemical process. Now, an external source of direct current supplies electrons to the anode and collects them from the cathode, thereby recharging the cell. In a smartphone battery, this recharging process takes about a couple of hours, which is quite a long time.

The Quantum Dot Batteries by StoreDot

Quantum dots are about five dozen times smaller than a single HIV vireo. These dots are actually peptides that have certain chemical and physical properties, such as optical or the ability to generate charge when strained. Only two peptides are connected with each other and their crystalline structure helps them in their stability and ability to hold a charge, which lasts about thousands of charge cycles.

In place of general ionic liquid electrolytes to generate electrons, StoreDot has made a battery that uses a quantum dot nanocrystal solution. The resulting battery is about five times more powerful.

The new battery built by StoreDot could make the recharging process a matter of only a few seconds. The Israeli firm produces so-called nanodots that, due to their small size, improves the capacitance of electrodes and the functionality of electrolyte. This ultimately results in batteries getting fully charged in seconds rather than hours.

In essence, we have developed a new generation of electrodes with new materials – we call it MFE – Multi Function Electrode,” StoreDot CEO Doron Myersdorf told. “On one side it acts like a supercapacitor (with very fast charging), and on the other is like a lithium electrode (with slow discharge). The electrolyte is modified with our nanodots in order to make the multifunction electrode more effective.”

Unlike other producers of nanodots that are heavy metal based, making them toxic, StoreDot’s nanodots are made from bio-organic raw materials that are environment-friendly. Apart from being non-toxic, these materials are also naturally abundant. The nanodots also employ a basic biological mechanism of self-assembly that makes them cheap to produce.

The self-discharge properties of nanodots-based cells are similar to those of lithium-ion cells. StoreDot’s first prototype targeted the approximate capacity of a smartphone battery (around 2,000 mAh). Therefore, the possibilities with these new type of batteries are endless.

The Future is Charged-up

The battery is a prototype, and it’s still quite big and clunky — matching with a laptop charger in dimensions. However, StoreDot plans to reshape its size and begin mass production of the device in 2016.

Myersdorf told that the technology could also be used in electric cars, which will need some modification of the electrode so that it produces higher currents (this may need configuring a large number of cells in parallel).

Whatever the deficiencies in the prototype now, we can surely believe that the smartphones are going to get a boost in the near future. StoreDot’s clean and inspirational technology has already started a new era of smart smartphone usage and it can only be better with the course of time.

The company has built the prototype for Samsung Galaxy S4, but it says it will soon start manufacturing nanodot-based batteries for other brands as well. That means we can just plug-in, wait for about a minute and then start using the smartphones again. This is like drinking a glass of glucose water and start running again in a marathon.

Of course, there is still some work to be done to make the battery fully useful and functional, but the prototype has made it clear that we are heading towards a new smartphone age where recharging is a matter of just a few seconds. And, that is a good news for one and all.