What are the IEEE 802.11 Wireless LAN Standards? 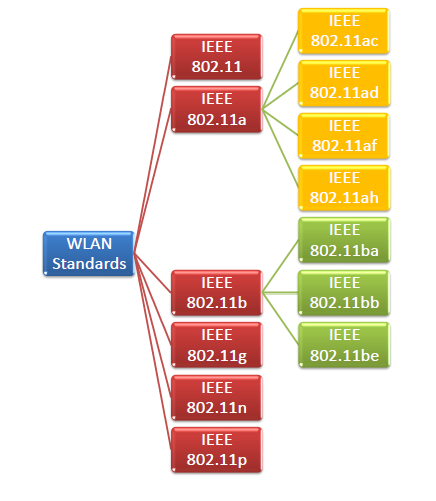 IEEE 802.11 was the original version released in 1997. It provided 1 Mbps or 2 Mbps data rate in the 2.4 GHz band and used either frequency-hopping spread spectrum (FHSS) or direct-sequence spread spectrum (DSSS). It is obsolete now.

802.11a was published in 1999 as a modification to 802.11, with orthogonal frequency division multiplexing (OFDM) based air interface in physical layer instead of FHSS or DSSS of 802.11. It provides a maximum data rate of 54 Mbps operating in the 5 GHz band. Besides it provides error correcting code. As 2.4 GHz band is crowded, relatively sparsely used 5 GHz imparts additional advantage to 802.11a.

802.11n was approved and published in 2009 that operates on both the 2.4 GHz and the 5 GHz bands. It has variable data rate ranging from 54 Mbps to 600 Mbps. It provides a marked improvement over previous standards 802.11 by incorporating multiple-input multiple-output antennas (MIMO antennas).

802.11 is an amendment for including wireless access in vehicular environments (WAVE) to support Intelligent Transportation Systems (ITS). They include network communications between vehicles moving at high speed and the environment. They have a data rate of 27 Mbps and operate in 5.9 GHz band.