Ethernet is a set of technologies and protocols that are used primarily in LANs. It was first standardized in 1980s as IEEE 802.3 standard. Ethernet is classified into two categories: classic Ethernet and switched Ethernet.

In switched Ethernet, the hub connecting the stations of the classic Ethernet is replaced by a switch. The switch connects the high-speed backplane bus to all the stations in the LAN. The switch-box contains a number of ports, typically within the range of 4 – 48. A station can be connected in the network by simply plugging a connector to any of the ports. Connections from a backbone Ethernet switch can go to computers, peripherals or other Ethernet switches and Ethernet hubs.

The following diagram shows configuration of a switched Ethernet − 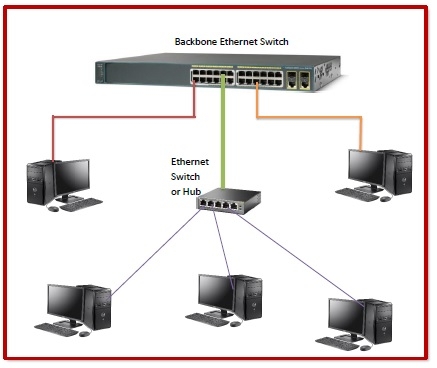 Unlike classic Ethernet in which the channel is shared by the stations, in switched Ethernet, each station gets a dedicated connection. When a port of the switch receives a frame, it checks the destination address in the frame and then sends the frame to the corresponding port, for outgoing data.

In switched Ethernet, collisions do not occur in the channel due to the presence of dedicated connection to each station. However, collisions may still occur in a destination port if it receives frames from more than one ports simultaneously. In a switch, each port has its own individual collision domain and resolves it individually.

The frame format of switched Ethernet is same as that of classic Ethernet. The fields are −