In general variables in SAS represent the column names of the data tables it is analysing. But it can also be used for other purpose like using it as a counter in a programming loop. In the current chapter we will see the use of SAS variables as column names of SAS Data Set.

SAS has three types of variables as below −

This is the default variable type. These variables are used in mathematical expressions.

In the above syntax, the INPUT statement shows the declaration of numeric variables.

Character variables are used for values that are not used in Mathematical expressions. They are treated as text or strings. A variable becomes a character variable by adding a $ sing with a space at the end of the variable name.

In the above syntax, the INPUT statement shows the declaration of character variables.

These variables are treated only as dates and they need to be in valid date formats. A variable becomes a date variable by adding a date format with a space at the end of the variable name.

In the above syntax, the INPUT statement shows the declaration of date variables.

Use of Variables in SAS Program

The above variables are used in SAS program as shown in below examples. 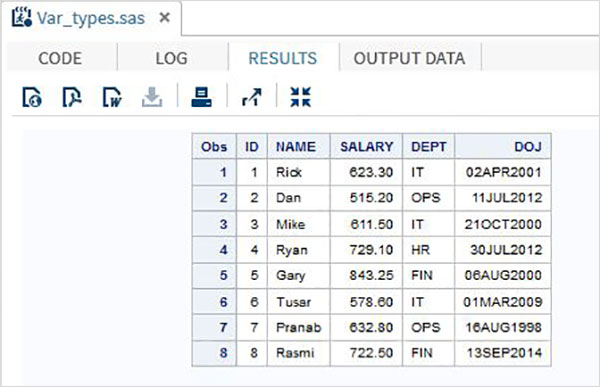 The variables are very useful in analysing the data. They are used in expressions in which the statistical analysis is applied. Let’s see an example of analysing the built-in Data Set named CARS which is present under Libraries → My Libraries → SASHELP. Double click on it to explore the variables and their data types. 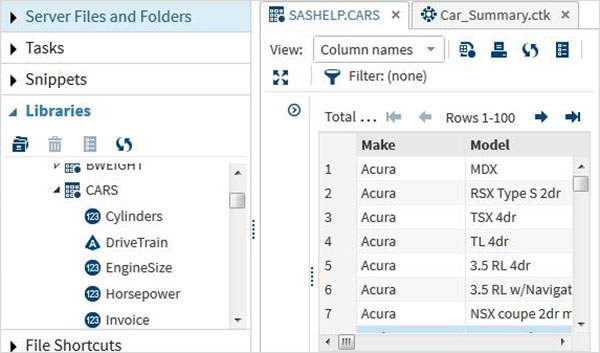 Next we can produce a summary statistics of some of these variables using the Tasks options in SAS studio. Go to Tasks -> Statistics -> Summary Statistics and double click it to open the window as shown below. Choose Data Set SASHELP.CARS and select the three variables - MPG_CITY, MPG_Highway and Weight under the Analysis Variables. Hold the Ctrl key while selecting the variables by clicking. Click run. 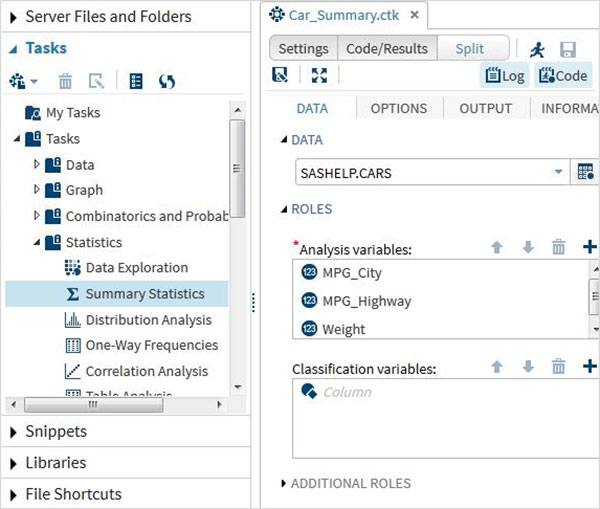 Click on the results tab after the above steps. It shows the statistical summary of the three variables chosen. The last column indicates number of observations (records) used in the analysis.