The full form of RADAR is RAdio Detection And Ranging. Detection refers to whether the target is present or not. The target can be stationary or movable, i.e., non-stationary. Ranging refers to the distance between the Radar and the target.

In any application of Radar, the basic principle remains the same. Let us now discuss the principle of radar.

Radar is used for detecting the objects and finding their location. We can understand the basic principle of Radar from the following figure. 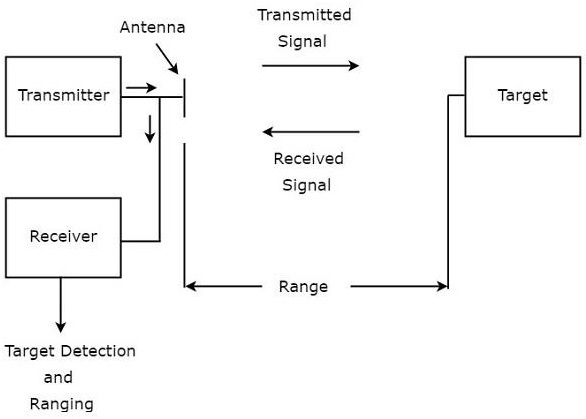 As shown in the figure, Radar mainly consists of a transmitter and a receiver. It uses the same Antenna for both transmitting and receiving the signals. The function of the transmitter is to transmit the Radar signal in the direction of the target present.

Target reflects this received signal in various directions. The signal, which is reflected back towards the Antenna gets received by the receiver.

Following are the basic terms, which are useful in this tutorial.

Now, let us discuss about these basic terms one by one.

The distance between Radar and target is called Range of the target or simply range, R. We know that Radar transmits a signal to the target and accordingly the target sends an echo signal to the Radar with the speed of light, C.

Now, the following is the formula for Speed.

We can find the range of the target by substituting the values of C & T in Equation 1.

Radar signals should be transmitted at every clock pulse. The duration between the two clock pulses should be properly chosen in such a way that the echo signal corresponding to present clock pulse should be received before the next clock pulse. A typical Radar wave form is shown in the following figure.

As shown in the figure, Radar transmits a periodic signal. It is having a series of narrow rectangular shaped pulses. The time interval between the successive clock pulses is called pulse repetition time, $T_P$.

Therefore, pulse repetition frequency is nothing but the frequency at which Radar transmits the signal.

We know that Radar signals should be transmitted at every clock pulse. If we select a shorter duration between the two clock pulses, then the echo signal corresponding to present clock pulse will be received after the next clock pulse. Due to this, the range of the target seems to be smaller than the actual range.

We can use either Equation 3 or Equation 5 for calculating maximum unambiguous range of the target.

We will get the minimum range of the target, when we consider the time required for the echo signal to receive at Radar after the signal being transmitted from the Radar as pulse width. It is also called the shortest range of the target.

We will get the value of minimum range of the target, $R_{min}$ by substituting the values of $C$ and $\tau$ in Equation 6.