In this section, we will learn about the different types of duplexers. We can classify the Duplexers into the following three types.

In our subsequent sections, we will discuss the types of Duplexers in detail. 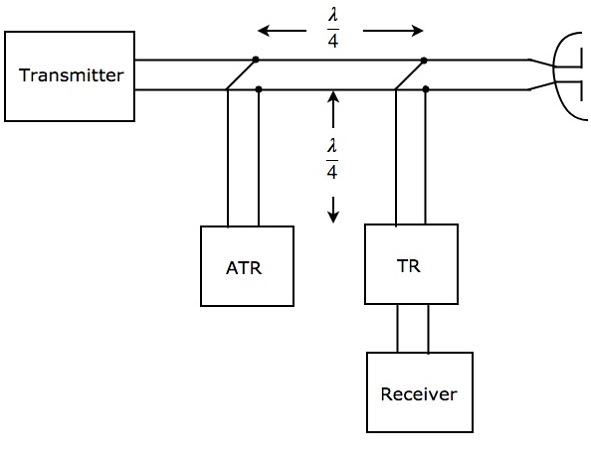 The Branch-type Duplexer is suitable only for low cost Radars, since it is having less power handling capability.

We know that a two-hole Directional Coupler is a 4-port waveguide junction consisting of a primary waveguide and a secondary waveguide. There are two small holes, which will be common to those two waveguides.

The signal, which is produced by the transmitter has to reach the Antenna for the Antenna to transmit that signal during transmission time. The solid lines with arrow marks shown in the above figure represent how the signal reaches Antenna from transmitter.

The dotted lines with arrow marks shown in the above figure represent the signal, which is leaked from the Dual TR tubes; this will reach only the matched load. So, no signal has been reached to the receiver.

The configuration of Balanced Duplexer for reception purpose is shown in figure given below.

The Balanced Duplexer has high power handling capability and high bandwidth when compared to Branch-type Duplexer.

We know that the functionality of the circulator is that if we apply an input to a port, then it will be produced at the port, which is adjacent to it in the clockwise direction. There is no output at the remaining ports of the circulator.

So, consider a 4-port circulator and connect the transmitter, Antenna, receiver and matched load to port1, port2, port3 and port4 respectively. Now, let us understand how the 4-port circulator works as Duplexer.

The signal, which is received by the Antenna has to reach the receiver during reception time. This purpose will be achieved when the Antenna present at port2 receives an external signal.

The following figure shows the block diagram of circulator as Duplexer − 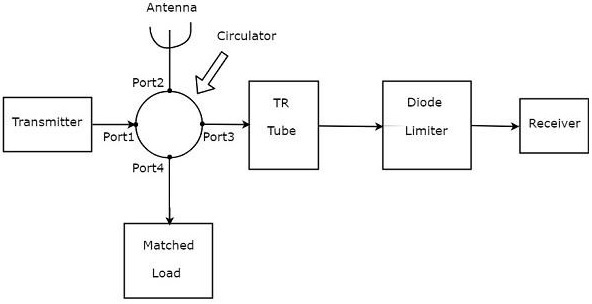 The above figure consists of a 4-port circulator — Transmitter, Antenna and the matched load is connected to port1, port2 and port4 of circulator respectively as discussed in the beginning of the section.