Python includes conditional and looping statements, which can be used to extract the data accurately for forensics. For flow control, it provides if/else, while, and a high-level for statement that loops over any "iterable" object.

The major area where Python differs from other programming languages is in its use of dynamic typing. It uses variable names that refer to objects. These variables need not be declared.

Python includes a set of built-in data types such as strings, Boolean, numbers, etc. There are also immutable types, which means the values which cannot be changed during the execution.

Python also has compound built-in data types that includes tuples which are immutable arrays, lists, and dictionaries which are hash tables. All of them are used in digital forensics to store values while gathering evidence.

Python supports groups of modules and/or packages which are also called third-party modules (related code grouped together in a single source file) used for organizing programs.

Python includes an extensive standard library, which is one of the main reasons for its popularity in computational forensics.

The following illustration shows in a graphical manner how the Python code is first interpreted to produce a bytecode and how the bytecode gets processed by the PVM to produce the output. 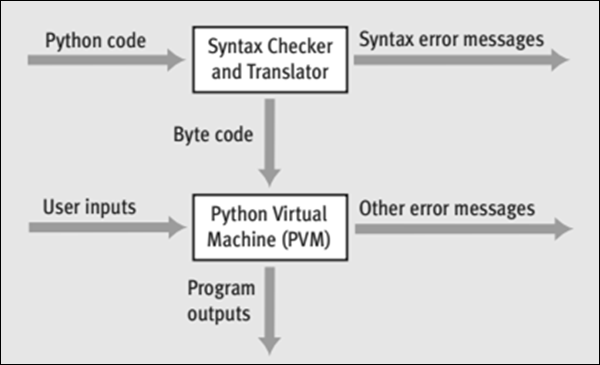