Decision making is anticipation of conditions occurring while execution of the program and specifying actions taken according to the conditions.

Decision structures evaluate multiple expressions which produce TRUE or FALSE as outcome. You need to determine which action to take and which statements to execute if outcome is TRUE or FALSE otherwise. 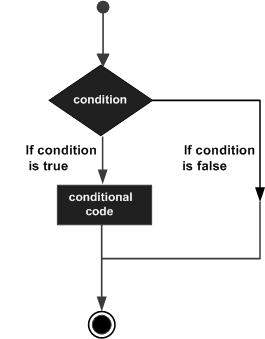 Python programming language assumes any non-zero and non-null values as TRUE, and if it is either zero or null, then it is assumed as FALSE value.

Let us go through each decision making briefly −

If the suite of an if clause consists only of a single line, it may go on the same line as the header statement.

Here is an example of a one-line if clause −