A collective class of signaling techniques are employed before transmitting a signal to provide a secure communication, known as the Spread Spectrum Modulation. The main advantage of spread spectrum communication technique is to prevent “interference” whether it is intentional or unintentional.

The signals modulated with these techniques are hard to interfere and cannot be jammed. An intruder with no official access, is never allowed to crack them. Hence these techniques are used for military purposes. These spread spectrum signals transmit at low power density and has a wide spread of signals.

A coded sequence of 1s and 0s with certain auto-correlation properties, called as PseudoNoise coding sequence is used in spread-spectrum techniques. It is a maximum-length sequence, which is a type of cyclic code.

Narrow-band signals have the signal strength concentrated as shown in the frequency spectrum in the following figure. 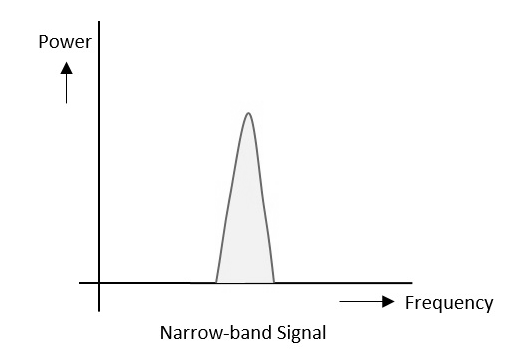 Here are the features of narrow-band signals −

Though the features are good, these signals are prone to interference.

The spread spectrum signals have the signal strength distributed as shown in the following frequency spectrum figure. 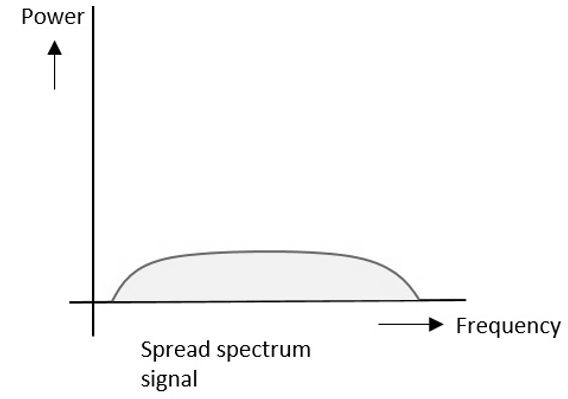 Here are the features of spread spectrum signals −

With these features, the spread spectrum signals are highly resistant to interference or jamming. Since, multiple users can share the same spread spectrum bandwidth without interfering with one another, these can be called as multiple access techniques.

Spread spectrum multiple access techniques use signals which have a transmission bandwidth whose magnitude is greater than the minimum required RF bandwidth.

Spread spectrum signals can be classified into two categories −

For example, a frequency was allotted to sender 1 for a particular period of time. Now, after a while, sender 1 hops to the other frequency and sender 2 uses the first frequency, which was previously used by sender1. This is called as frequency reuse.

The frequencies of the data are hopped from one to another in order to provide secure transmission. The amount of time spent on each frequency hop is called as Dwell time.

Comparison between FHSS and DSSS/CDMA

Both the spread spectrum techniques are popular for their characteristics. To have a clear understanding, let us take a look at their comparisons.

Following are the advantages of Spread Spectrum.

Although spread spectrum techniques were originally designed for military uses, they are now being used widely as commercial purpose.