Noise is an unwanted signal which interferes with the original message signal and corrupts the parameters of the message signal. This alteration in the communication process, leads to the message getting altered. It is most likely to be entered at the channel or the receiver.

The noise signal can be understood by taking a look at the following example. 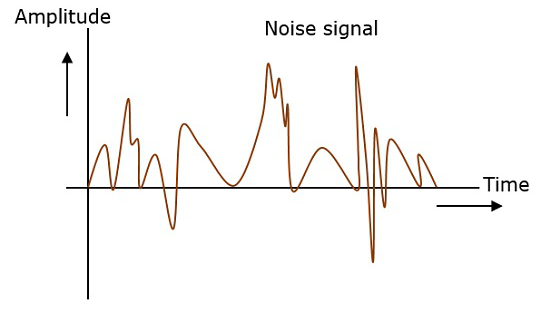 Hence, it is understood that noise is some signal which has no pattern and no constant frequency or amplitude. It is quite random and unpredictable. Measures are usually taken to reduce it, though it can’t be completely eliminated.

Most common examples of noise are −

Noise is an inconvenient feature which affects the system performance. Following are the effects of noise.

Noise limits the operating range of the systems

Noise indirectly places a limit on the weakest signal that can be amplified by an amplifier. The oscillator in the mixer circuit may limit its frequency because of noise. A system’s operation depends on the operation of its circuits. Noise limits the smallest signal that a receiver is capable of processing.

Noise affects the sensitivity of receivers

Sensitivity is the minimum amount of input signal necessary to obtain the specified quality output. Noise affects the sensitivity of a receiver system, which eventually affects the output.

The classification of noise is done depending on the type of the source, the effect it shows or the relation it has with the receiver, etc.

There are two main ways in which noise is produced. One is through some external source while the other is created by an internal source, within the receiver section.

This noise is produced by the external sources which may occur in the medium or channel of communication, usually. This noise cannot be completely eliminated. The best way is to avoid the noise from affecting the signal.

Most common examples of this type of noise are −

This noise is produced by the receiver components while functioning. The components in the circuits, due to continuous functioning, may produce few types of noise. This noise is quantifiable. A proper receiver design may lower the effect of this internal noise.

Most common examples of this type of noise are −

Signal-to-Noise Ratio (SNR) is the ratio of the signal power to the noise power. The higher the value of SNR, the greater will be the quality of the received output.

The ratio of output SNR to the input SNR can be termed as the Figure of merit (F). It is denoted by F. It describes the performance of a device.

Figure of merit of a receiver is −

It is so because for a receiver, the channel is the input.