Frequency division multiplexing is used in radio and television receivers. The main use of FM is for radio communications. Let us take a look at the structure of FM transmitter and FM receiver along with their block diagrams and working.

FM transmitter is the whole unit which takes the audio signal as an input and delivers FM modulated waves to the antenna as an output to be transmitted. FM transmitter consists of 6 main stages. They are illustrated in the following figure.

The working of FM transmitter can be explained as follows.

Requirements of a Receiver

Such a radio receiver has the following requirements.

For these requirements to get fulfilled, the tuner circuit and the mixer circuit should be very effective. The procedure of RF mixing is an interesting phenomenon.

The RF mixing unit develops an Intermediate Frequency (IF) to which any received signal is converted, so as to process the signal effectively.

RF Mixer is an important stage in the receiver. Two signals of different frequencies are taken where one signal level affects the level of the other signal, to produce the resultant mixed output. The input signals and the resultant mixer output is illustrated in the following figures. 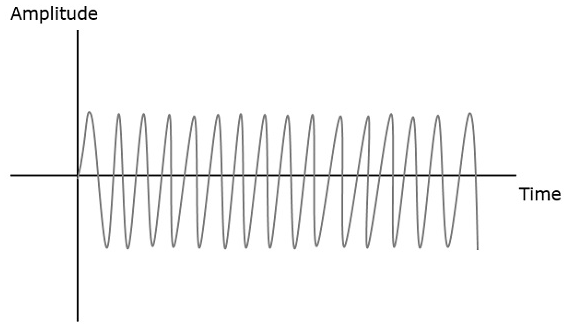 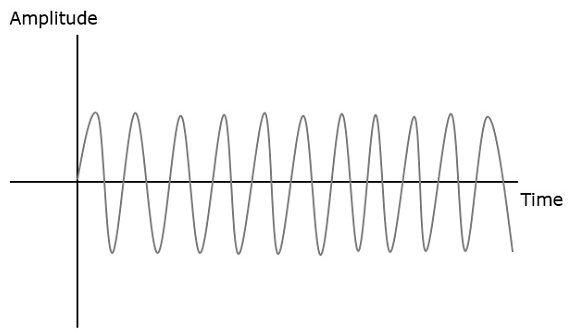 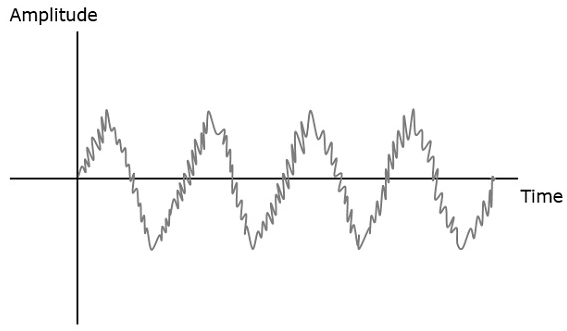 A mixer of two signals of different frequencies are produced at the output.

If this is observed in frequency domain, the pattern looks like the following figure. 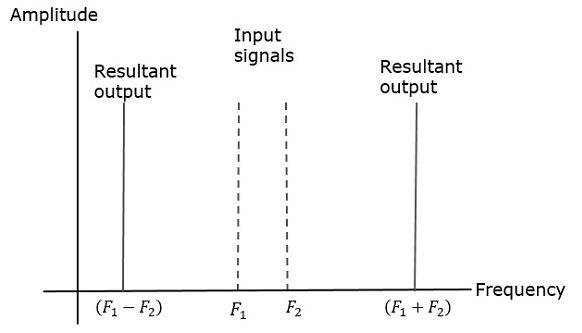 The symbol of a RF mixer looks like the following figure. 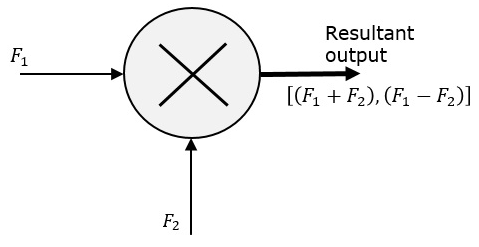 The two signals are mixed to produce a resultant signal, where the effect of one signal, affects the other signal and both produce a different pattern as seen previously.

The FM receiver is the whole unit which takes the modulated signal as input and produces the original audio signal as an output. Radio amateurs are the initial radio receivers. However, they have drawbacks such as poor sensitivity and selectivity.

Selectivity is the selection of a particular signal while rejecting the others. Sensitivity is the capacity of detecting a RF signal and demodulating it, while at the lowest power level.

To overcome these drawbacks, super heterodyne receiver was invented. This FM receiver consists of 5 main stages. They are as shown in the following figure.

The modulated signal received by the antenna is first passed to the tuner circuit through a transformer. The tuner circuit is nothing but a LC circuit, which is also called as resonant or tank circuit. It selects the frequency, desired by the radio receiver. It also tunes the local oscillator and the RF filter at the same time.

The signal from the tuner output is given to the RF-IF converter, which acts as a mixer. It has a local oscillator, which produces a constant frequency. The mixing process is done here, having the received signal as one input and the local oscillator frequency as the other input. The resultant output is a mixture of two frequencies [(f1 + f2),(f1 − f2)] produced by the mixer, which is called as the Intermediate Frequency (IF).

Intermediate frequency filter is a bandpass filter, which passes the desired frequency. It eliminates any unwanted higher frequency components present in it as well as the noise. IF filter helps in improving the Signal to Noise Ratio (SNR).

The received modulated signal is now demodulated with the same process used at the transmitter side. The frequency discrimination is generally used for FM detection.

This is the power amplifier stage which is used to amplify the detected audio signal. The processed signal is given strength to be effective. This signal is passed on to the loudspeaker to get the original sound signal.

This super heterodyne receiver is well used because of its advantages such as better SNR, sensitivity and selectivity.

The presence of noise is a problem in FM as well. Whenever a strong interference signal with closer frequency to the desired signal arrives, the receiver locks that interference signal. Such a phenomenon is called as the Capture effect.