This chapter talks about concepts of web design and advantages of using parallax scroll in web design.

Since the beginning of 20th century, paper media has got into a cut-throat competition due to digital media. The digital media includes what we see on internet and hence the allied magazines that come along.

The newsletters that you get as a part of weekly/monthly subscriptions are also included in the digital media. Primarily, digital media heavily depends on mobile and desktop devices. It makes a difference when you can see content on your mobile (handheld) as well as desktop devices. The way content is displayed on either of devices, a specific style of designing the content is at play.

This style of designing is referred as Web Designing. From a designing or coding standpoint, when a web page designer sets out to build a webpage, he/she takes the mobile devices in consideration as well.

According to Wikipedia, Web design encompasses many different skills and disciplines in the production and maintenance of websites. One of such skills is designing an impactful experience for users. Web design caters for this experience and provides an organized way for arranging the page contents and provides different styling to them.

Web design includes − interface design, graphic design and using certain standards to write the code. This work can be performed by a single person or by a team of people.

There are many tools available in market to make this work easy, however, it is up to one’s creative skills to create the appearance of web page.

With the technology evolution, there is an explosion of knowledge. Internet has become a thing and it has skyrocketed the quality of our lives. At any given point, more and more information is being processed by an average internet user. This information can be in the form of a website on a desktop computer or from a handheld device; tablet or a mobile phone.

Though so much information tries to attract the user’s attention, it is obvious that as a person designing a web experience, there are only 3 seconds allocated to pass the message across.

How does one deal with this? It is more than important to pass the message, because it is at the source for any web design. You want to build a website that communicates, at the same time it has to attract and make the user stick to the content. It is a difficult task indeed.

Considering the vast scope of work for any given web content, more and more people are getting into the world of Web Design. A creative web designer is the talk of the town thanks to his/her amazing talent of creating a good user experience. The web designer may currently take up a job at a marketing/advertising company or start on his/her own to dive into the web designing.

Aesthetic appeal is the key for a given content on web. This means a web designer must be aware of the principles and foundation of design, color, spacing, etc. More and more users get to see great quality web content every day. It is obvious that one will compare the current webpage or website with the one that was visited few hours or few minutes back. The ordering of the content, coupled with good graphics and colors has made many standalone banners/pages a popular thing on the internet.

Let us take the case of a simple graphic. There are many graphics on the internet, called memes. They are simple Graphics Interchange Format (GIF) images with some text embedded inside the graphics. These memes are making rounds of internet based on a recent event in some part of the world. If we look at this example, the only appeal they have is graphic and some relevant or irrelevant text.

Still, it has gained so much of popularity which makes one think about amazing possibilities on the Internet.

Thus, for a web design to be effective, both the creativity and method to communicate the message play important roles.

It is important point to note that a successful web page is combination of Web Design and Web Development. As per current market trend, along with web designer, a web developer is a must have in the team. A web designer will always look for inspiration and use his/her creativity to create graphics and relevant color schemes. Whereas a web developer will use his/her coding skills to bring the graphics and color schemes live on the website.

A web designer should have a knowledge of writing the code as well, to make the intended graphic or color scheme usable for a web developer. A simple code in a simple application like Notepad can help a web designer to take the driving seat in the web development.

Parallax Scrolling falls into the work boundary of both web designer and web developer. A web designer might create the effect of Parallax Scrolling using the tools such as InVision, UXPin to convey the web developer the intended behavior on scroll. Further, a web developer will take it on his/her skills to create the parallax scrolling effect. This can be done by different JavaScript, CSS and jQuery techniques. A detailed description of each of these methods is provided in next chapters.

As per the definition specified in the previous section, parallax scrolling is a technique when the background content is moved at a different speed than the foreground content when scrolling.

A simple CSS technique to create parallax scrolling effect is shown on this website – The Urban Walks. 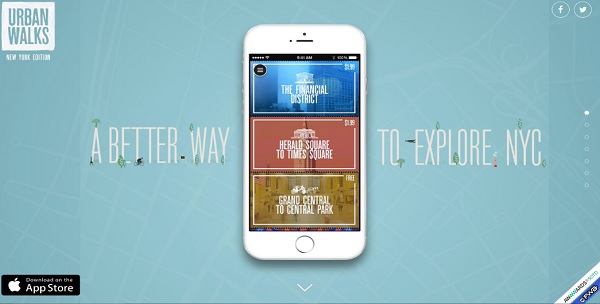 This transition is giving you a feeling that the phone is constant in its place and the background is getting changed as you scroll down. This effect is called parallax scrolling effect. You know that you are scrolling it down as there is an indicator of the screens towards the very right of the screen in the form of some dots.

The first use of parallax scrolling was in the old computer games. Where a fixed background image would move at a slower speed as the character moved faster than the background. Some examples of these games – Disney’s Aladdin and Disney’s Lion King. These games were launched back in 1993 and 1994 respectively.

While it is true that it started with the games, but currently, many web designers are emphasizing on the effect to have their audience love their site. The advantages of parallax scrolling are extended from website to mobile sites.

These websites, once designed with parallax scrolling for the desktop versions, are added with code that supports mobile screens as well.

Advantages of Parallax Scrolling in Web and Mobile

In this section, we will discuss the advantages of using parallax scrolling from various perspectives as discussed below −