Syntactic analysis or parsing or syntax analysis is the third phase of NLP. The purpose of this phase is to draw exact meaning, or you can say dictionary meaning from the text. Syntax analysis checks the text for meaningfulness comparing to the rules of formal grammar. For example, the sentence like “hot ice-cream” would be rejected by semantic analyzer.

In this sense, syntactic analysis or parsing may be defined as the process of analyzing the strings of symbols in natural language conforming to the rules of formal grammar. The origin of the word ‘parsing’ is from Latin word ‘pars’ which means ‘part’.

It is used to implement the task of parsing. It may be defined as the software component designed for taking input data (text) and giving structural representation of the input after checking for correct syntax as per formal grammar. It also builds a data structure generally in the form of parse tree or abstract syntax tree or other hierarchical structure.

The main roles of the parse include −

In this kind of parsing, the parser starts with the input symbol and tries to construct the parser tree up to the start symbol.

In this section, we will learn about the two types of derivations, which can be used to decide which non-terminal to be replaced with production rule −

It may be defined as the graphical depiction of a derivation. The start symbol of derivation serves as the root of the parse tree. In every parse tree, the leaf nodes are terminals and interior nodes are non-terminals. A property of parse tree is that in-order traversal will produce the original input string.

Grammar is very essential and important to describe the syntactic structure of well-formed programs. In the literary sense, they denote syntactical rules for conversation in natural languages. Linguistics have attempted to define grammars since the inception of natural languages like English, Hindi, etc.

The theory of formal languages is also applicable in the fields of Computer Science mainly in programming languages and data structure. For example, in ‘C’ language, the precise grammar rules state how functions are made from lists and statements.

A mathematical model of grammar was given by Noam Chomsky in 1956, which is effective for writing computer languages.

Mathematically, a grammar G can be formally written as a 4-tuple (N, T, S, P) where − 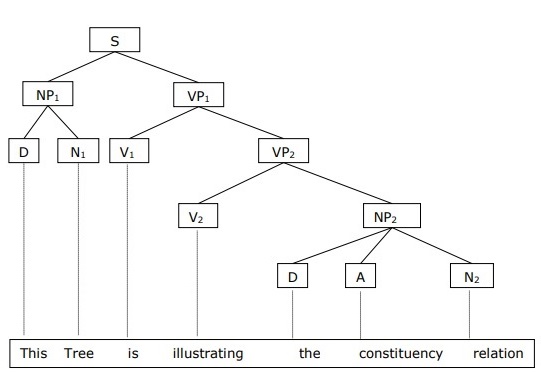 We can write the sentence “This tree is illustrating the dependency relation” as follows; 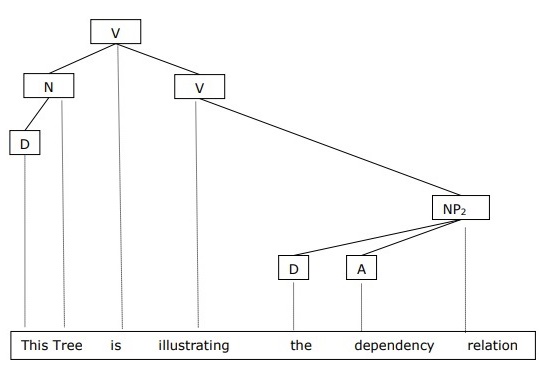 Context free grammar, also called CFG, is a notation for describing languages and a superset of Regular grammar. It can be seen in the following diagram − 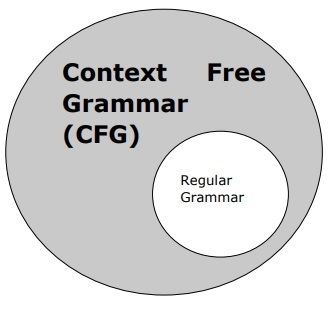 It is denoted by V. The non-terminals are syntactic variables that denote the sets of strings, which further help defining the language, generated by the grammar.

It is also called tokens and defined by Σ. Strings are formed with the basic symbols of terminals.

The production begins from the start symbol. It is denoted by symbol S. Non-terminal symbol is always designated as start symbol.