The most difficult problem of AI is to process the natural language by computers or in other words natural language processing is the most difficult problem of artificial intelligence. If we talk about the major problems in NLP, then one of the major problems in NLP is discourse processing − building theories and models of how utterances stick together to form coherent discourse. Actually, the language always consists of collocated, structured and coherent groups of sentences rather than isolated and unrelated sentences like movies. These coherent groups of sentences are referred to as discourse.

Coherence and discourse structure are interconnected in many ways. Coherence, along with property of good text, is used to evaluate the output quality of natural language generation system. The question that arises here is what does it mean for a text to be coherent? Suppose we collected one sentence from every page of the newspaper, then will it be a discourse? Of-course, not. It is because these sentences do not exhibit coherence. The coherent discourse must possess the following properties −

The discourse would be coherent if it has meaningful connections between its utterances. This property is called coherence relation. For example, some sort of explanation must be there to justify the connection between utterances.

Another property that makes a discourse coherent is that there must be a certain kind of relationship with the entities. Such kind of coherence is called entity-based coherence.

In this section, we will learn about the algorithms for discourse segmentation. The algorithms are described below −

The class of unsupervised discourse segmentation is often represented as linear segmentation. We can understand the task of linear segmentation with the help of an example. In the example, there is a task of segmenting the text into multi-paragraph units; the units represent the passage of the original text. These algorithms are dependent on cohesion that may be defined as the use of certain linguistic devices to tie the textual units together. On the other hand, lexicon cohesion is the cohesion that is indicated by the relationship between two or more words in two units like the use of synonyms.

It infers the same proposition P from both the assertions − S0 and S1 For example, two statements show the relation elaboration: Ram was from Chandigarh. Shyam was from Kerala. 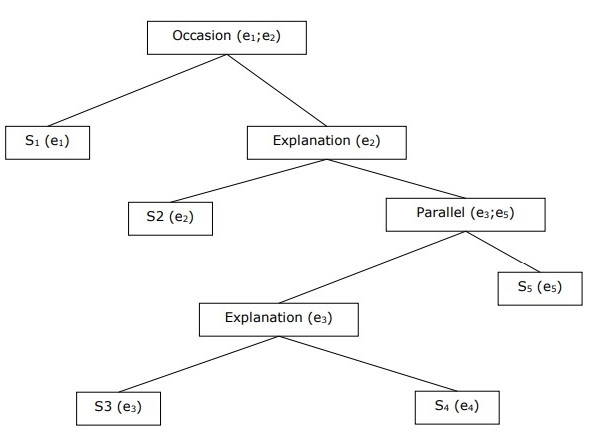 Interpretation of the sentences from any discourse is another important task and to achieve this we need to know who or what entity is being talked about. Here, interpretation reference is the key element. Reference may be defined as the linguistic expression to denote an entity or individual. For example, in the passage, Ram, the manager of ABC bank, saw his friend Shyam at a shop. He went to meet him, the linguistic expressions like Ram, His, He are reference.

On the same note, reference resolution may be defined as the task of determining what entities are referred to by which linguistic expression.

We use the following terminologies in reference resolution −

Such kind of reference represents the entities that are new to the hearer into the discourse context. For example − in the sentence Ram had gone around one day to bring him some food − some is an indefinite reference.

Opposite to above, such kind of reference represents the entities that are not new or identifiable to the hearer into the discourse context. For example, in the sentence - I used to read The Times of India – The Times of India is a definite reference.

It is a form of definite reference. For example, Ram laughed as loud as he could. The word he represents pronoun referring expression.

These demonstrate and behave differently than simple definite pronouns. For example, this and that are demonstrative pronouns.

It is the simplest type of referring expression. It can be the name of a person, organization and location also. For example, in the above examples, Ram is the name-refereeing expression.

The two reference resolution tasks are described below.