Information retrieval (IR) may be defined as a software program that deals with the organization, storage, retrieval and evaluation of information from document repositories particularly textual information. The system assists users in finding the information they require but it does not explicitly return the answers of the questions. It informs the existence and location of documents that might consist of the required information. The documents that satisfy user’s requirement are called relevant documents. A perfect IR system will retrieve only relevant documents.

With the help of the following diagram, we can understand the process of information retrieval (IR) − 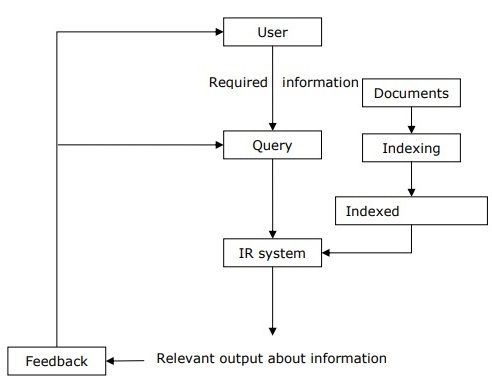 It is clear from the above diagram that a user who needs information will have to formulate a request in the form of query in natural language. Then the IR system will respond by retrieving the relevant output, in the form of documents, about the required information.

The main goal of IR research is to develop a model for retrieving information from the repositories of documents. Here, we are going to discuss a classical problem, named ad-hoc retrieval problem, related to the IR system.

In ad-hoc retrieval, the user must enter a query in natural language that describes the required information. Then the IR system will return the required documents related to the desired information. For example, suppose we are searching something on the Internet and it gives some exact pages that are relevant as per our requirement but there can be some non-relevant pages too. This is due to the ad-hoc retrieval problem.

Mathematically, models are used in many scientific areas having objective to understand some phenomenon in the real world. A model of information retrieval predicts and explains what a user will find in relevance to the given query. IR model is basically a pattern that defines the above-mentioned aspects of retrieval procedure and consists of the following −

Mathematically, a retrieval model consists of −

F − The modeling framework for D, Q along with relationship between them.

R (q,di) − A similarity function which orders the documents with respect to the query. It is also called ranking.

It is the simplest and easy to implement IR model. This model is based on mathematical knowledge that was easily recognized and understood as well. Boolean, Vector and Probabilistic are the three classical IR models.

It is the enhancement of classical IR model making use of some specific techniques from some other fields. Cluster model, fuzzy model and latent semantic indexing (LSI) models are the example of alternative IR model.

Let us now learn about the design features of IR systems −

The primary data structure of most of the IR systems is in the form of inverted index. We can define an inverted index as a data structure that list, for every word, all documents that contain it and frequency of the occurrences in document. It makes it easy to search for ‘hits’ of a query word.

Stop words are those high frequency words that are deemed unlikely to be useful for searching. They have less semantic weights. All such kind of words are in a list called stop list. For example, articles “a”, “an”, “the” and prepositions like “in”, “of”, “for”, “at” etc. are the examples of stop words. The size of the inverted index can be significantly reduced by stop list. As per Zipf’s law, a stop list covering a few dozen words reduces the size of inverted index by almost half. On the other hand, sometimes the elimination of stop word may cause elimination of the term that is useful for searching. For example, if we eliminate the alphabet “A” from “Vitamin A” then it would have no significance.

Stemming, the simplified form of morphological analysis, is the heuristic process of extracting the base form of words by chopping off the ends of words. For example, the words laughing, laughs, laughed would be stemmed to the root word laugh.

In our subsequent sections, we will discuss about some important and useful IR models.

It is the oldest information retrieval (IR) model. The model is based on set theory and the Boolean algebra, where documents are sets of terms and queries are Boolean expressions on terms. The Boolean model can be defined as −

We can explain this model by a query term as an unambiguous definition of a set of documents.

Now, what would be the result after combining terms with Boolean AND Operator? It will define a document set that is smaller than or equal to the document sets of any of the single terms. For example, the query with terms “social” and “economic” will produce the documents set of documents that are indexed with both the terms. In other words, document set with the intersection of both the sets.

Advantages of the Boolean Mode

The advantages of the Boolean model are as follows −

Disadvantages of the Boolean Model

The disadvantages of the Boolean model are as follows −

Due to the above disadvantages of the Boolean model, Gerard Salton and his colleagues suggested a model, which is based on Luhn’s similarity criterion. The similarity criterion formulated by Luhn states, “the more two representations agreed in given elements and their distribution, the higher would be the probability of their representing similar information.”

Cosine is a normalized dot product, which can be calculated with the help of the following formula − 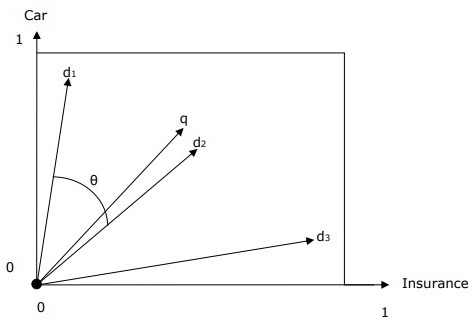 The top ranked document in response to the terms car and insurance will be the document d2 because the angle between q and d2 is the smallest. The reason behind this is that both the concepts car and insurance are salient in d2 and hence have the high weights. On the other side, d1 and d3 also mention both the terms but in each case, one of them is not a centrally important term in the document.

Term weighting means the weights on the terms in vector space. Higher the weight of the term, greater would be the impact of the term on cosine. More weights should be assigned to the more important terms in the model. Now the question that arises here is how can we model this.

One way to do this is to count the words in a document as its term weight. However, do you think it would be effective method?

Another method, which is more effective, is to use term frequency (tfij), document frequency (dfi) and collection frequency (cfi).

It may be defined as the number of occurrences of wi in dj. The information that is captured by term frequency is how salient a word is within the given document or in other words we can say that the higher the term frequency the more that word is a good description of the content of that document.

It may be defined as the total number of documents in the collection in which wi occurs. It is an indicator of informativeness. Semantically focused words will occur several times in the document unlike the semantically unfocused words.

It may be defined as the total number of occurrences of wi in the collection.

Let us now learn about the different forms of document frequency weighting. The forms are described below −

This is also classified as the term frequency factor, which means that if a term t appears often in a document then a query containing t should retrieve that document. We can combine word’s term frequency (tfij) and document frequency (dfi) into a single weight as follows −

Here N is the total number of documents.

N = documents in the collection

The primary goal of any information retrieval system must be accuracy − to produce relevant documents as per the user’s requirement. However, the question that arises here is how can we improve the output by improving user’s query formation style. Certainly, the output of any IR system is dependent on the user’s query and a well-formatted query will produce more accurate results. The user can improve his/her query with the help of relevance feedback, an important aspect of any IR model.

Relevance feedback takes the output that is initially returned from the given query. This initial output can be used to gather user information and to know whether that output is relevant to perform a new query or not. The feedbacks can be classified as follows −

It may be defined as the feedback that is obtained from the assessors of relevance. These assessors will also indicate the relevance of a document retrieved from the query. In order to improve query retrieval performance, the relevance feedback information needs to be interpolated with the original query.

It is the feedback that is inferred from user behavior. The behavior includes the duration of time user spent viewing a document, which document is selected for viewing and which is not, page browsing and scrolling actions, etc. One of the best examples of implicit feedback is dwell time, which is a measure of how much time a user spends viewing the page linked to in a search result.

Consider the following steps to implement this feedback −