Language is a method of communication with the help of which we can speak, read and write. For example, we think, we make decisions, plans and more in natural language; precisely, in words. However, the big question that confronts us in this AI era is that can we communicate in a similar manner with computers. In other words, can human beings communicate with computers in their natural language? It is a challenge for us to develop NLP applications because computers need structured data, but human speech is unstructured and often ambiguous in nature.

In this sense, we can say that Natural Language Processing (NLP) is the sub-field of Computer Science especially Artificial Intelligence (AI) that is concerned about enabling computers to understand and process human language. Technically, the main task of NLP would be to program computers for analyzing and processing huge amount of natural language data.

We have divided the history of NLP into four phases. The phases have distinctive concerns and styles.

The work done in this phase focused mainly on machine translation (MT). This phase was a period of enthusiasm and optimism.

In this phase, the work done was majorly related to world knowledge and on its role in the construction and manipulation of meaning representations. That is why, this phase is also called AI-flavored phase.

The phase had in it, the following −

This phase can be described as the grammatico-logical phase. Due to the failure of practical system building in last phase, the researchers moved towards the use of logic for knowledge representation and reasoning in AI.

The third phase had the following in it −

We can describe this as a lexical & corpus phase. The phase had a lexicalized approach to grammar that appeared in late 1980s and became an increasing influence. There was a revolution in natural language processing in this decade with the introduction of machine learning algorithms for language processing.

Language is a crucial component for human lives and also the most fundamental aspect of our behavior. We can experience it in mainly two forms - written and spoken. In the written form, it is a way to pass our knowledge from one generation to the next. In the spoken form, it is the primary medium for human beings to coordinate with each other in their day-to-day behavior. Language is studied in various academic disciplines. Each discipline comes with its own set of problems and a set of solution to address those.

Consider the following table to understand this −

Ambiguity and Uncertainty in Language

The ambiguity of a single word is called lexical ambiguity. For example, treating the word silver as a noun, an adjective, or a verb.

This kind of ambiguity arises due to the use of anaphora entities in discourse. For example, the horse ran up the hill. It was very steep. It soon got tired. Here, the anaphoric reference of “it” in two situations cause ambiguity. 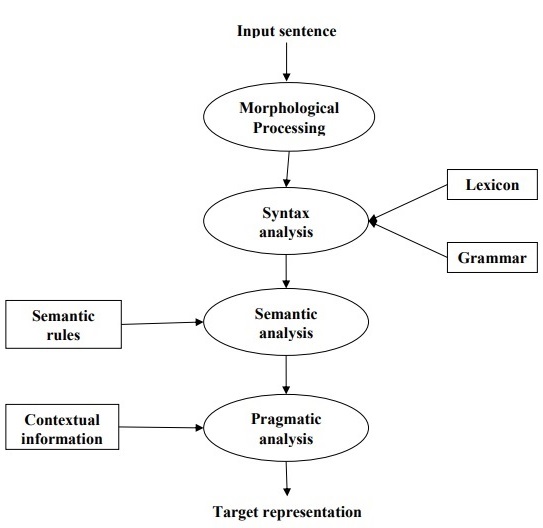 It is the first phase of NLP. The purpose of this phase is to break chunks of language input into sets of tokens corresponding to paragraphs, sentences and words. For example, a word like “uneasy” can be broken into two sub-word tokens as “un-easy”.

It is the second phase of NLP. The purpose of this phase is two folds: to check that a sentence is well formed or not and to break it up into a structure that shows the syntactic relationships between the different words. For example, the sentence like “The school goes to the boy” would be rejected by syntax analyzer or parser.

It is the third phase of NLP. The purpose of this phase is to draw exact meaning, or you can say dictionary meaning from the text. The text is checked for meaningfulness. For example, semantic analyzer would reject a sentence like “Hot ice-cream”.

It is the fourth phase of NLP. Pragmatic analysis simply fits the actual objects/events, which exist in a given context with object references obtained during the last phase (semantic analysis). For example, the sentence “Put the banana in the basket on the shelf” can have two semantic interpretations and pragmatic analyzer will choose between these two possibilities.