Tagging is a kind of classification that may be defined as the automatic assignment of description to the tokens. Here the descriptor is called tag, which may represent one of the part-of-speech, semantic information and so on.

Now, if we talk about Part-of-Speech (PoS) tagging, then it may be defined as the process of assigning one of the parts of speech to the given word. It is generally called POS tagging. In simple words, we can say that POS tagging is a task of labelling each word in a sentence with its appropriate part of speech. We already know that parts of speech include nouns, verb, adverbs, adjectives, pronouns, conjunction and their sub-categories.

One of the oldest techniques of tagging is rule-based POS tagging. Rule-based taggers use dictionary or lexicon for getting possible tags for tagging each word. If the word has more than one possible tag, then rule-based taggers use hand-written rules to identify the correct tag. Disambiguation can also be performed in rule-based tagging by analyzing the linguistic features of a word along with its preceding as well as following words. For example, suppose if the preceding word of a word is article then word must be a noun.

As the name suggests, all such kind of information in rule-based POS tagging is coded in the form of rules. These rules may be either −

Another technique of tagging is Stochastic POS Tagging. Now, the question that arises here is which model can be stochastic. The model that includes frequency or probability (statistics) can be called stochastic. Any number of different approaches to the problem of part-of-speech tagging can be referred to as stochastic tagger.

In this approach, the stochastic taggers disambiguate the words based on the probability that a word occurs with a particular tag. We can also say that the tag encountered most frequently with the word in the training set is the one assigned to an ambiguous instance of that word. The main issue with this approach is that it may yield inadmissible sequence of tags.

It is another approach of stochastic tagging, where the tagger calculates the probability of a given sequence of tags occurring. It is also called n-gram approach. It is called so because the best tag for a given word is determined by the probability at which it occurs with the n previous tags.

Transformation based tagging is also called Brill tagging. It is an instance of the transformation-based learning (TBL), which is a rule-based algorithm for automatic tagging of POS to the given text. TBL, allows us to have linguistic knowledge in a readable form, transforms one state to another state by using transformation rules.

It draws the inspiration from both the previous explained taggers − rule-based and stochastic. If we see similarity between rule-based and transformation tagger, then like rule-based, it is also based on the rules that specify what tags need to be assigned to what words. On the other hand, if we see similarity between stochastic and transformation tagger then like stochastic, it is machine learning technique in which rules are automatically induced from data.

Working of Transformation Based Learning(TBL)

The algorithm will stop when the selected transformation in step 2 will not add either more value or there are no more transformations to be selected. Such kind of learning is best suited in classification tasks.

The advantages of TBL are as follows −

The disadvantages of TBL are as follows −

Before digging deep into HMM POS tagging, we must understand the concept of Hidden Markov Model (HMM).

For example, a sequence of hidden coin tossing experiments is done and we see only the observation sequence consisting of heads and tails. The actual details of the process - how many coins used, the order in which they are selected - are hidden from us. By observing this sequence of heads and tails, we can build several HMMs to explain the sequence. Following is one form of Hidden Markov Model for this problem − 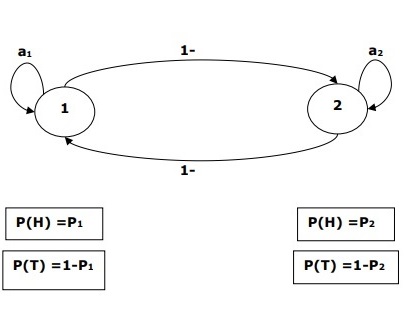 We assumed that there are two states in the HMM and each of the state corresponds to the selection of different biased coin. Following matrix gives the state transition probabilities −

We can also create an HMM model assuming that there are 3 coins or more.

This way, we can characterize HMM by the following elements −

Use of HMM for POS Tagging

The POS tagging process is the process of finding the sequence of tags which is most likely to have generated a given word sequence. We can model this POS process by using a Hidden Markov Model (HMM), where tags are the hidden states that produced the observable output, i.e., the words.

Mathematically, in POS tagging, we are always interested in finding a tag sequence (C) which maximizes −

On the other side of coin, the fact is that we need a lot of statistical data to reasonably estimate such kind of sequences. However, to simplify the problem, we can apply some mathematical transformations along with some assumptions.

The use of HMM to do a POS tagging is a special case of Bayesian interference. Hence, we will start by restating the problem using Bayes’ rule, which says that the above-mentioned conditional probability is equal to −

The beginning of a sentence can be accounted for by assuming an initial probability for each tag.

Now, on the basis of the above two assumptions, our goal reduces to finding a sequence C which maximizes

Now the question that arises here is has converting the problem to the above form really helped us. The answer is - yes, it has. If we have a large tagged corpus, then the two probabilities in the above formula can be calculated as −