Let us now create a APK file for the app created. For that we need to install the following −

To create the app and build it, one important requirement is JDK 1.8. We need the version of jdk as 1.8 as that is a stable one so far with cordova build.

Go to the following link to install jdk1.8. 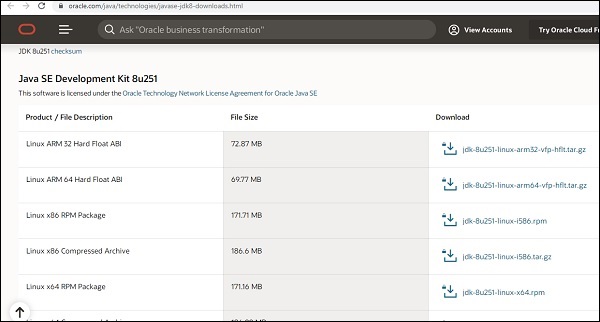 Install the Jdk as per your operating system. Once the installation is done, it is necessary to update the environment path JAVA_HOME. In case you face difficulty in installation of Jdk refer this Java installation tutorial.

It will display screen as shown below − 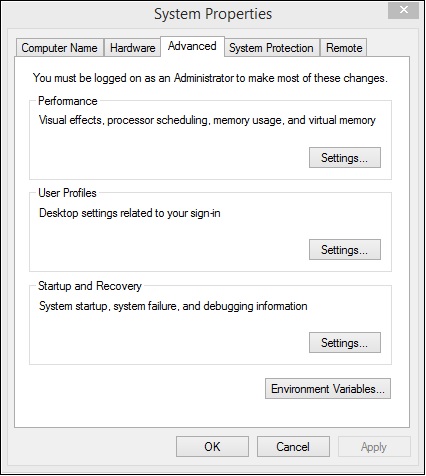 Click on Environment Variables. It will display screen as shown below − 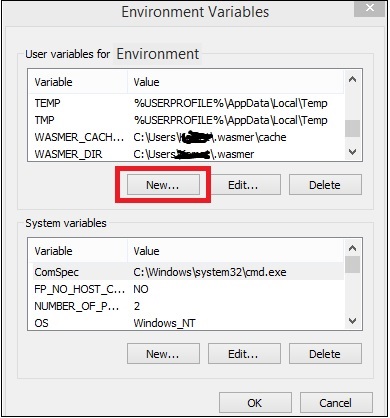 Click on New button, it will display a screen as shown below −

The variable name will be JAVA_HOME and the Variable value will be the path where jdk 1.8 is located.

Once done close your command prompt and open it again. Now type java –version, it should display the version of java you have installed as shown below −

We are done with installing JAVA.

Now install gradle, which is one of important requirements to build the app.

Go to Gradle install page and install latest version of gradle as per your operating system.Download and install it on your system. Once installed you need to update the path of Gradle in environment variables. In case you face any difficulty in installation refer this gradle tutorial.

For windows users to update environment variable, add the location of gradle to in Path variable as shown below −

We have installed Gradle version 6.2.2 for this tutorial.

Now install Android studio on your system. Along with Android studio, the Android sdk package will also get installed. We are more interested in the Android SDK package. The SDK package will have tools and build-tools, we need to add the same to Environment Variables for cordova to access during build. Incase you face any difficulty refer this tutorial for Android Studio Installation.

Now add the tools and build-tools path for example −

To the path variable at the end as shown below −

Once done close the command prompt and open it again.

Execute the command: sdkmanager "platform-tools" "platforms;android-28" in your the command prompt. It will install the android-28 target api that we need. For more details on sdkmanager refer the below link −

We have already created a project setup using cordova and phonegap in the previous chapter. This is how the app looks in the browser − 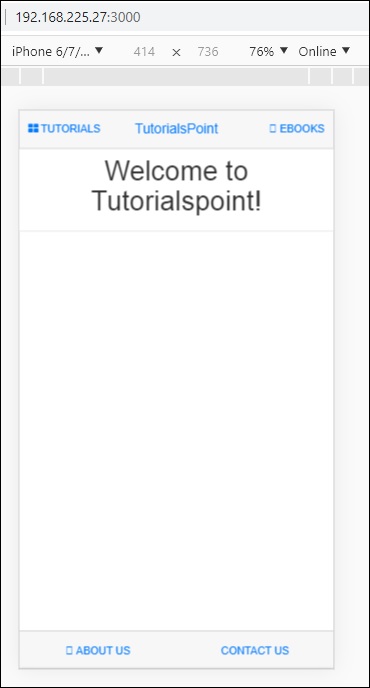 Let us now check if cordova has all the details to build the app. To do that we can use the following command − cordova requirements.

To build the app using cordova the command is as follows −

The above command will build the app for all the platforms you have added.

We have added for only one platform i.e android, hence can use the cordova build command directly.

If the build is successful, you should get the following output −

It displays the location of the app apk file. Now we have the apk, but we cannot publish the same, as it is an app-debug.apk. We need a release apk that can be published in Google Play Store.

To create app-release, we need to create a keystore. A keystore is a file that has private keys and certificates.

Following is the command to create a keystore −

The name of the keystore we have used is as follows −

The alias is testapp-key same as the name.

When the command executes, it will ask you some questions, like password, first and last name, organization unit, city, state, etc. You can enter the information and once done the keystore will be created and the keystore file will be stored inside the project root folder.

Once the keystore is done, create a build.json inside myfirstapp\testapp\platforms\android\build.json.

The details are as shown below −

You will have to enter the keystore details, as well the password you entered while generating the keystore.

Once the keystore and build.json are done, we are now ready to build the apk for release.

Following is the command to build it −

Once the build is successful, you will get the release apk as shown below −

Now you can use this apk in your Google Play Store to publish it and get your app live.