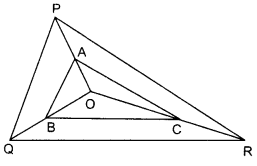 If a line divides two sides of a triangle proportionally, then it is parallel to the third side.