The top most company in the world – Google announced on its Google+ page that the latest version of voice search command is available which is based on relationships. This voice search command enhances its voice-recognition feature and allows user to make calls, send messages, and search using voice commands. 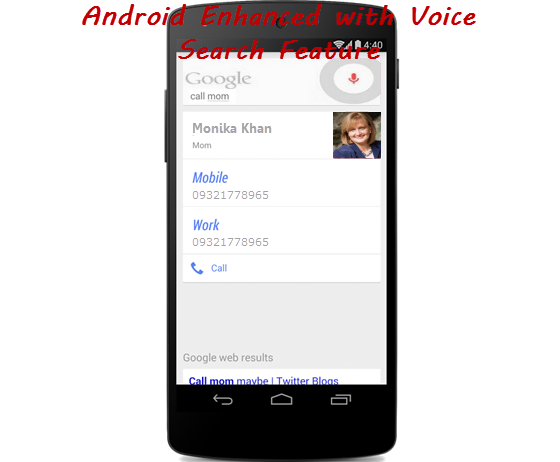 The official google+ post said, “Starting now, the Google search app on your Android phone will be able to pull up the right contact for you-and if you don’t have Mom saved as “mom,” it’ll help you set that up quickly.”

If somebody wants to communicate with someone in lesser time then just form Android phone sends the command “Ok Google, call Mom” or “Ok Google, send a text to my brother”. After shooting the command, Google search app on Android phone will automatically pull up the right contact or if somebody doesn’t have Mom saved as “mom,” it’ll help to set that up quickly.

For example, say “call brother” then the command “call brother” get activated and start searching and calling those people to whom user has marked as having that relationship with user. If user simply say “brother”, Google will simply search and call to the same number but suppose user does not have a contact marked with that name then this function facilitates user to allocate that relationship to someone in the contacts list which will appear instead of the name says “brother”.

At present, the relationships supported by this function are: boyfriend/girlfriend, mother/mom, father/dad, brother, sister, cousin, niece, nephew, aunt, uncle, grandmother/grandma, grandfather/grandpa and so on. In-laws are not yet supported.

It does not trouble user to manually update any app, Google automatically enable this function in the backend.

At present, any business man, office working user and home user all are very busy with their task, want to avail those functionality which reduces their time and effort to some other task, this awesome function will definitely help them to reduce time and effort. So that, Users enjoy using this app on Android Phone.